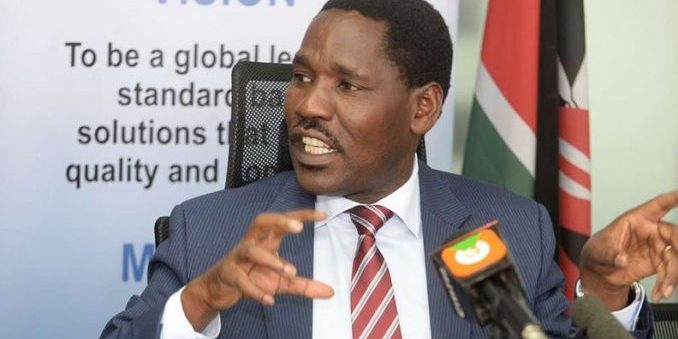 Most Kenyan bureaucrats are law abiding and try the best to toe the government’s line but then there are a few, for one reason or another, who are notorious for arbitrarily making unilateral decisions that are detrimental to the country’s welfare and population at large. Examples of this pattern are common place where they declare and implement policies without due regard of their impact to the common welfare of the masses. There is just something that seems to get in these bureaucrats heads that makes them believe they are demigods who lord over the masses; whether it is in education where every Cabinet Secretaries, from Kaimenyi, Matiang’i and now Mohamed have made outlandish declarations and decisions with adverse results to the public or in Trade and Industry by Munya, the actions of these unelected unaccountable bureaucrats are simply out of control. Left to their own devices, these folks will ruin lives and the President must do more to rein them in.

Let me just put it as plainly as I possibly can. Bureaucrats who defy, alter, misinterpret or misapply the president’s directives are liable for insubordination and should be treated accordingly. Whereas those who work under the president may have different views or preferences of what their role in government is, reality is they serve at the pleasure of the President and have very limited discretion in effecting the President’s policies, they are his assistants and so when they act contrary to the president’s known directives or initiate policies that are counter to the president’s, they not only antagonize and undermine the President’s leadership and standing with the public but it also smacks dereliction of duty on their part. The government must, by necessity, be of one accord in tackling the country’s problems. Opinions and actions contrary to the president’s directives should left to the opposition and activists.  Here are but a few examples that I believe need to be addressed urgently.

Trade and Industrialization Cabinet Secretary Peter Munya’s recent announcement banning the import of vehicles older than five years is bad for the economy and must be fully rescinded. As with most things government, Mr. Munya failed to fully consult or seek public participation in arriving at such a decision that will undoubtedly have a negative impact on the economy and appeared to be more interested in catering to special interests of new vehicle assemblers who have production plants in Kenya. Munya was clearly kowtowing to wealthy special interests at the expenses of the poor masses and that’s unfortunate. In this instance, Kenya, if the policy is implemented in full or partially, will see a net decline in economic activity and increase of the cost of living. It is common sense that economists and operators in the transport industry agree on. Reducing the number of vehicle imports by limiting the age of the imports and substituting them with fewer but costlier vehicles simply creates an imbalance in supply and demand; fewer vehicles on the roads translates into low demand and higher costs to everyone else who relies on transportation services (demand in this sense is defined as the wherewithal to pay for the imports and the attendant services); the net result is a contraction of the economy, not expansion. The government will also forfeit tax revenues that are currently generated by Industry whose key stakeholders have adamantly stood their ground against Munya. It is worth noting that Munya declined their input but readily and gladly accepted and adopted the recommendations of the manufacturers instead! It is an irony that the CS whose very salary and the top of the range transportation he uses are bought and paid for by the very people his policies will hurt, how will he know- everything he does and owns is already catered for by someone else he has no empathy. This simply MUST stop.

Unfair & Unjust Wealth Redistribution – By and large these manufacturers who seem to have such a grip on Mr. Munya do already have great government incentives in the form of tax breaks and other goodies unparalleled to the raw deal industry operators get from the same government. These incentives are intended to create economic growth and generate new jobs but not to cannibalize the economic output of the sector as a whole by shifting growth from the used vehicle industry to manufacturers. This is the kind of wealth redistribution that the government has NO BUSINESS engaging itself in. Kenyans understand the games being played and why, Munya didn’t even try to hide in whose pockets he is in, the excuse he provided speaks for itself, “to boost local manufacturing” – what does that have to do with rendering the masses who depend on used vehicles jobless or raising cost of living for the rest of us?

This is equally inexplicable to most Kenyans i.e. Education Cabinet Secretary Amina Mohammed just recently issued an edict declaring that college graduates who are unable to pay back their student loans to High Education Loan Board (HELB) will be arrested and sent to prison!!!!!!!!!!. Clearly she has lost it.  It is hard enough for these college graduates who can’t find jobs or create self-employment due to an archaic and obsolete education system that churns out poorly equipped graduates and rather than worry about their job placements and how best to assist graduates become productive members of society, she wants to lock them up instead! I mean something is horribly wrong somewhere in Governmentville and President Kenyatta needs to take remedial action sooner rather than later. His predecessor Dr. Fred Matiang’i decided that the best way to stop cheating and measure students’ proficiency was to test them on subject matter not taught in the current syllabi – he pulled material from past tests which I suspect was just as antiquated if not multiple times so. The result was massive failure. Matiang’i’s predecessor was just as ineffective, produced mass cheats who couldn’t struggled in college.

Shortly after taking office, in 2014 actually, President Uhuru Kenyatta issued a directive exempting Kenyans in the Diaspora from Vehicle import duty, primarily from Left Hand Drive countries. The policy, wildly popular with Kenyans in the Diaspora, was designed to restore equal treatment of Kenya’s Diaspora and to make it easier for Kenyans to import right hand vehicles purchased from third countries without being subjected to onerous and exorbitant import duty that they would otherwise be exempt from if the imports were from their primary residences in North America primarily. It was a welcome relief to most if not all Kenyans in the affected countries but no sooner had the President Kenyatta made the order than Finance Minister Henry Rotich effectively reversed the President’s order by injecting onerous caveats that poisoned the president’s order and made it inoperable. There is something eerily unsettling when subordinates who are supposed to effect the president’s agenda look for and find a workaround to subvert him, I have never quite understood that. In Trump’s America, that would be the fastest ticket to the unemployment line but not in Kenyatta’s Kenya, this needs to be remedy this now worrying endemic pattern.