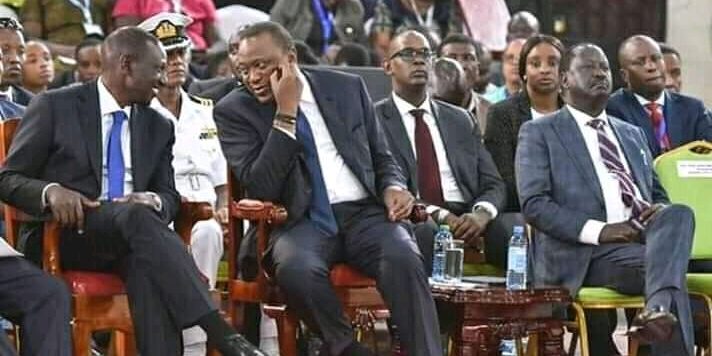 “Anti-Corruption Summit”? – What corruption? That is the question people are asking in reference to the just concluded “event” at “Bomas of Kenya”. “Timing is everything” as age-old proverb goes and timing couldn’t be worse for the summit. Forgive me for being cynical but this is why, almost at the very moment that President Kenyatta, Chief Justice David Maraga and former Prime Minister Raila Odinga were publicly putting their best feet forward in the fight against corruption, the National Land Commission (NLC), after making a determination that Deputy President William Samoei Ruto’s (also in attendance) corruptly grabbed public land along Lang’ata Road where he built Weston Hotel, issued an exceptionally bewildering decision exempting him from responsibility, https://www.standardmedia.co.ke/article/2001310832/report-how-nlc-shielded-weston. I mean you can’t make this up. It is not just the embarrassment and awkwardness wrought by the timing of NLC’s decision but also the hypocrisy of the decision itself; that they sanitized the very vice the president is fighting at the exact time he’s fighting it, it is a non sequitur not to mention how very impolite it was to ridicule the head of state who has staked his legacy at ending corruption. He has put all his best on public display on the one hand and all the while this state agency is blatantly undermining him so openly by exempting the biggest purveyor of corruption seated next to the president at the same summit. How does work? It is absurd beyond believe. Make no mistake folks, the NLC simply made an exception to accommodate Ruto’s corruption, a move clearly inconsistent with President’s Kenyatta’s seemingly genuine resolve to fight the scourge, it mocks the President and Kenyans; it renders the fight hollow and vain. It is a mirage. A smokescreen.

If there was any real good out of the summit it was seeing the executive arm of government of the same accord that corruption need to end but yet at odds on how best to effect the fight. Chief Justice David Maraga, as amiable as he always is, is a fair no-nonsense jurist who is not afraid to speak truth to the power that be and why should he? He is a clean, honest man whose integrity is NOT NEGOTIABLE; his credibility is unimpeachable and he spoke the truth. He admonished everyone not scapegoat the judiciary, provide the courts with the tools (technology) and resources (adequate funding) to effectively run its operations. The investigators and prosecutors must not treat this as a Public Relations exercise, conduct thorough investigations and frame the cases properly so they can be adjudicated and disposed of in a timely manner without compromising public interest or the rights of the accused. Rogue judges who adulterate the law for personal gain or misapply the law to let criminals off the hook must be reined in and Justice Maraga clearly stated that he’s looking into it and asked those with information to share with him, please heed his counsel.

WILLIAM RUTO HAS A CHECKERED PAST

Truth is corruption creates poverty, poverty doesn’t create corruption. It is common knowledge that William Samoei Ruto, the self- professed “Hustler”, has earned a dubious distinction as the master purveyor of corruption in Kenya. He’s reputed for brutality and quashing anyone or anything that stands in his way. He, in his righteous indignation, maintains a sanctimonious stance. I mean he’s very manipulative, but truth be told, Mr. Ruto’s entire career that we know of has been in government, a government employee who draws good pay but certainly not Billions of shillings worth and yet he is one of the wealthiest Kenyans who cannot account for sources of his fortune some of which he splashes around at fundraisers in Millions like candy. Ruto is known to play dirty and preys on the weak and vulnerable in society to get ahead. Some of Ruto’s transgressions include his infamous and particularly egregious forceful dispossession of Mr. Adrian Gilbert Muteshi, a Post-Election Violence victim, of his 100 acre land. The courts evicted Ruto from the land and fined him 5 Million shillings. He attempted to grab the Lang’ata Road Primary School land to expand his Weston Hotel but was stopped by public uproar. He was accused of selling Kenya Pipeline Land, nothing came of it. On April 13, 2004, Ruto and his close ally and then Lands Commissioner Samuel Mwaita were arrested and accused of grabbing public land, Ngong Forrest land and selling it for almost KSH 300 Million to private developers; KANU’s Uhuru Kenyatta stormed parliament in defense of Ruto and accused Kibaki of orchestrating a political purge against KANU. Ruto was later released and the crucial case file went missing. It is also worth noting that Samuel Mwaita allocated Ruto the land Weston Hoten is built, just connecting the dots. These are but some of the corrupt scandals that have dogged Mr. Ruto that elsewhere on earth this man would be serving long prison terms but not in Kenya and that’s really my point, how does Ruto get away with all these crimes? Why is he allowed to create and perpetuate unequal society that contributes to rot and resentment in our country? Why is NLC, an unelected and unaccountable outfit, allowed to perpetuate corruption?

The doctrine of equal access and protection under the law requires that that the state guarantee the same rights, privileges, and protections to all citizens. In other words, what’s good for the goose is also good for the gander. That is NOT in Kenya, instead the worst violators are the very leaders elected to safeguard our interests and “independent” meant to stop the excesses of the state; it is the case of the fox guarding the hen-house in the good old boys network while we the taxpayers are held holding the bag, this simply has to stop and now is the time. What do we do when not even the highest elected official in the country is powerless to stop them? In this case, while Ruto gets an exemption certificate for corruption ordinary Kenyans and investors were not so lucky, the government that Ruto co-heads demolished Billions of shillings in major properties owned by investors who followed the rules and did everything right as required of the same government that has now turned against them, I mean seriously who in their right mind thinks this is right? I remember years ago the Roads Minister Hon. Raila Odinga ordered demolishment of property built on grabbed public land (road reserves); it was controversial then but Odinga was fair and he made enemies for his actions but the public did not begrudge him. Fast forward to now, Ruto gets exempted while everyone else is thrown under the bus? That’s just not fair.

What’s the people’s recourse against the National land Commission and similarly situated rogue “independent” state agencies when they themselves aid and abet corruption? I mean how long can this hopelessness be allowed to continue that that even the highest elected official in the country is powerless to reign them in? It is condonation on their part of a vice that’s ruined the country. If the president is to be taken seriously, he should cause this rogue NLC to be reconstituted. The Director of Public Prosecutions (DPP) must intervene and investigate the commissioners who made the decision to exempt Ruto and the circumstances that makes corruption permissible in their minds. While at it, I would like to see Parliament reassess their suitability to serve as commissioners. Their conduct is against public policy and they held accountable, their continued stay is simply untenable as a matter of principle. They appear to mistakenly construe their designation as “independent” to mean that they are the law unto themselves and above the law which is not the case. Their independence simply shields them from outside influence so they can make fair decisions, exempting corruption is not a fair decision and has the hallmarks of undue outside influence. This must end. They need to be hounded out of office not only as penance but also deterrent against future indiscretions. Get rid of them.