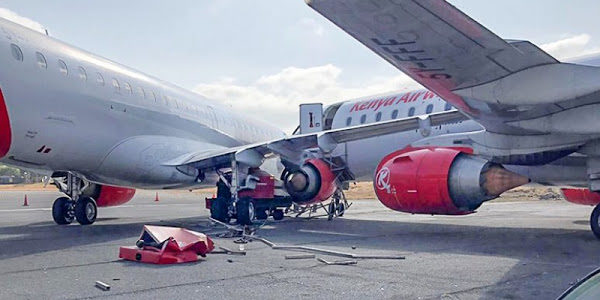 The recent revelation of “privately initiated” talks for the admittedly failing, debt ridden and insolvent Kenya Airways (KQ) to acquire and run the Jomo Kenyatta International Airport (JKIA), reads like a poorly written fiction play, https://www.nation.co.ke/news/Kenya-Airways-makes-bid-to-takeover-JKIA/1056-4907048-x7dxp5/index.html.  And yet in reality that is what’s is happening behind the scenes if the widely published reports are anything to go by. First I thought it was a joke because there is no plausible way this would make any economic or business sense, NONE Whatsoever. Even the report itself spells it out that this is specifically being considered to help Kenya Airways stay in business and not necessarily because it has reciprocal value to JKIA or Kenyans for that matter. Plainly put, if this asinine cockamamie grab of this strategic publicly owned asset is allowed it will be the biggest legalized blatant corruption in Kenya’s history. Where did we go wrong? How is it that one of Africa’s premier airports and the primary gateway to Kenya, The Pride of Africa is fast becoming the Disgrace of Africa?

Let’s call a spade a spade. Truth of the matter is that KQ’s balance sheet is terribly in bad shape. Word on the street is that the Airline’s creditors are some of the most influential who is who in the country and they don’t see how they will recoup their loans to the airline as it is currently constituted. In other words they don’t see the airline turning a profit anytime soon and so they have devised a very creative way to recover their monies, saddling the taxpayers by taking over JKIA and that is extremely unfortunate. The current financial woes at Kenyan Airways didn’t just happen overnight and cannot be blamed on the current management or board of directors. This has been long time coming as a result of bad financial decisions made overtime by, frankly, unqualified managers placed in management positions due to political patronage as opposed to merit. Titus Naikuni, the long serving Kenya Airlines CEO, should be held to account for his role in sinking Kenya Airways. We are now reaping the benefits of his bad decisions and those he was in cahoots with. JKIA is buoyed by fees multiple revenue streams including charges to concessionaires and airport shops, airlines, passengers, etc. That is by design its core business and competence. KQ on the other hand is an airline, the way I look at it is  really simple, KQ is no different than Matatu SACCO, granted it is a flying SACCO, nonetheless it should focus on its core competence i.e. ferrying passengers and freight in the air and make a profit doing so. SIMPLE AS THAT. If it has failed in that, (which it has) why should it be allowed more additional responsibility over profitable enterprise?

As the former Soviet Union was imploding under the crushing weight of communism and corruption, the state’s coffers had run empty and the country was running on fumes. The government’s programs could not be sustained on dwindling tax revenues. Luckily for the Soviets, the economy was centrally run and major strategic assets and monuments were still controlled by state in addition to large reserves of natural resources of gas and oil. The Russians simply sold those key assets at throwaway prices to the oligarchs and created Billionaires overnight. In effect it was the largest wealth redistribution in the guise privatization and led to concentration of massive state wealth in the hands of very few connected individuals.  The Soviets could afford that and did indeed recover because truth is their business acumen and skills are advanced and they have massive reserves of natural resources as pointed above.

Kenya on the hand, just like KQ, is insolvent and badly managed with corruption eating away at its core from inside out. The fight against corruption, though well received and noble, is effectively too little too late to make any discernible difference unless there is equally massive seizures and recovery of stolen property, of which there doesn’t appear adequate political resolve or will to actually effect. The state sold (gave away) majority of its assets long ago and even though some have thrived such as SAFARICOM, others have faltered miserably e.g. KQ. Bottom-line is, there is nothing left to sell or give away and now the state, clutching at straws, is leveraging national assets such as the Jomo Kenyatta International Airport to mollify failure and simply is NOT permissible. The last major attempted grab of a national asset by a private party was in 2002 when KANU tried to steal the Kenyatta International Conference Center (KICC) through self-help by allocating itself the asset. Of course then just elected President Mwai Kibaki would have none of it and swiftly put an end to it.

TAXPAYERS MUST NOT BE FORCED TO REWARD FAILURE

Jomo Kenyatta International Airport is a national asset and MUST be preserved, it is taxpayer funded and owned and must NOT be converted for private benefit. Taxpayers must NOT be on the hook for failed private enterprises. It simply never works; a perfect illustration is UCHUMI that has been bailed out by taxpayers time after time after time and has yet to turn profit let alone return the money to taxpayers. No sane bureaucrat or government would think handing over a profitable sovereign asset as strategic as JKIA to a failing private enterprise just to prop it up makes any sense at all, it doesn’t and if there is such people then they have absolutely no business being in government. What they are proposing here is what we call that leveraged buyout (LBO). LBOs only work if there is a sound business case and synergies between the entities who enter into such Mergers & Acquisitions (M&A), there is no such business case between Kenya Airways and Jomo Kenyatta International Airport, NONE!

Brookside Dairies and Kenya Cooperative Creameries (KCC) – The simplest analogy I can assign this crazy proposal is hypothetical and that is, the failed defunct KCC taking over the Kenyattas’ lucrative , profitable and well run Brookside Dairies just to prop up KCC. Would anyone in their right mind let alone the Kenyattas themselves think that is a good idea? Will they even entertain such madness? It is the same concept here.

KQ SHOULD FOCUS ON ITS CORE BUSINESS

By all accounts KQ was just granted a lifeline with the direct flight to the US, New York, NY. This is supposed to an extremely lucrative route and for a struggling airline, it should have put all its energies, efforts and focus on making this route a major success and power itself out of its operational and financial woes – not taking over an entire airport as a means for survival. The Kenyan Diaspora in the US is a major customer base for KQ provided the airline collaborates with Kenyans of all ethnic backgrounds in the US as opposed to being caught up in the deeply unproductive ethnic politics that have all but sunk the country. Instead and unfortunately, it appears that KQ was not ready for prime time in the United States. Despite best efforts to coopt KQ into reaching out to build strategic alliances with the Diaspora, the airline seems so cash strapped that it doesn’t seem to have even a basic marketing budget to attract its base customers, Kenyans in the US, it is baffling to be honest with you. They ruined their entrance into the US market, pegged their entire strategy on a non-existent agreement with Delta Airlines, no known codeshare agreements in place with domestic operators to feed its fleet at Kennedy’s Airport and no workaround plan, no wonder the US route is likely to fail unless drastic corrective measures are undertaken. The point being though, if the airline can’t undertake the basic steps to grow its brand and business by itself and recognize that it needs to deploy resources and that there is such a thing as customer acquisition costs for example, but pushing to straddle itself on the backs of taxpayers instead,  then the airline is clearly destined for failure. The US route is KQ’s best chance out of its woes and I hope they take full advantage of it.

BROADER CONSEQUENCES IF THIS IS ALLOWED TO TAKE EFFECT

This is adverse ploy is simply meant to redistribute public resources from taxpayers into private hands. Perhaps the biggest risk outside of the obvious losses to taxpayers is the potential of a major fallout between Kenya’s aviation management and the rest of the world. Airports world over are run and managed by governments, bilateral and multilateral agreements and grants with respect to the aviation management and safety coordinated at governmental levels. A KQ takeover of JKIA would invariably mean that existing agreements and covenants will either be canceled or rewritten all over again. Additionally, any future agreements and coordination on aviation would be between privately held KQ and these governmental/multilateral entities, which will NOT only be extremely disruptive and uncalled for but also NOT happen because multinationals are not going to bend their own systems to accommodate Kenya’s shenanigans – effectively ending said cooperation. Absent such governance structures in place, the likelihood of JKIA being downgraded are very well within the realm of possibilities removes this cooperation. Not to mention that this is an airline whose two planes collided at its JKIA hanger while undergoing maintenance literary barely two weeks ago. How can an airline with such a dismal record that can’t seem to park its own planes properly be tasked with safely managing an entire airport?? HOW???   Nowhere on earth is this even remotely fathomable, that a failing poorly run private enterprise will latch on to a profitable national asset as its get out of jail ticket. So Kenya needs to really think hard if it wants to revise If Kenya’s government allows KQ’s takeover

Finally, let the policymakers and KQ find a better way to resuscitate the Airline. KQ should apply business sense into its operations and stop piggybacking on taxpayers for survival; it should ask for subsidies or taxpayer aid if and when necessary/justified but the notion that it applied to takeover a national airport just so it can afloat is stunningly asinine but even worse is that there are people in Kenya’s government who entertained the nonsense as a topic of discussion. Kenya Airways’ core business is passenger travel, simply put, transport passengers from point A to point B and do it efficiently and effectively enough to make a profit. Focus on that, PERIOD.