Why Iebc’s Chiloba & His Secretariat Must Vacate Office Now 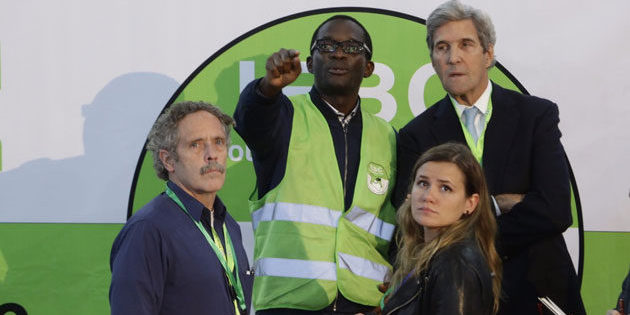 As the old adage goes, “fool me once shame on you, fool me twice shame on me.” And off to the races we go,  “WEMBE NI ULE ULE” or loosely translated “RAZOR IS THE SAME”,  Jubilee and its supporters’ maintain in their latest slogan in reference to the IEBC as they confidently predict the next presidential results outcome following the Supreme Court’s ruling that annulled President Uhuru Kenyatta’s August 8 “reelection”. This is a key component of Jubilee’s overall strategy of retaining power i.e. maintaining the status quo at the IEBC. It is common knowledge that the August 8 elections were severely compromised by the IEBC as confirmed by the Supreme Court in its ruling; there’s no dispute that Independent Electoral & Boundaries Commission (IEBC)’s CEO Ezra Chiloba, in his capacity as the “executive” that oversees operations is directly responsible for the success or failure of the election. It is also an open secret that Ezra Chiloba has and continues to maintain an unholy alliance with the Jubilee government that severely compromised the Commission’s “independence” and it’s clear why President Kenyatta and his Deputy Ruto want to retain the Chiloba’s team in office, their hold on power depends on the status quo. They fooled the world, they must not be afforded another opportunint to do it again. Whether Chiloba intentionally scammed voters and tilted the presidential vote count in Jubilee’s favor on August 8 or just by sheer incompetence on his part allowed the counts to be compromised or BOTH is really beside the point at this time. What is relevant and what we all know is that it will be untenable to have Chiloba and those who perpetrated this political heist run the new election in October, it just won’t happen. If they want to repeat the same scam, then yes Chiloba and team should remain but if Kenyans will must be properly reflected at the polls, Chiloba and team MUST LEAVE office, willfully or terminated.

The French Firm, OT-Morpho, which supplied the electronic system used to tally the presidential votes said its audit showed no hacking of data in the system. This can only mean that ONLY the IEBC had access to the system and so this was “inside job”. I believe OT-Morpho and I hope they are correct because we only need to look at ONLY one entity as being responsible for scamming voters. Indeed Chairman Chebukati’s credentials were used to log in more than 9,000 times from various IP addresses, how is that possible? Of course IEBC created those credentials and used them for nefarious purposes. ONLY IEBC tampered with results, nobody else.

PERPETRATORS AT THE SECRETARIAT MUST LEAVE OFFICE, PROSECUTED AND SURCHARGED

Let’s call a spade a spade folks, elsewhere in world, both in public office and in private enterprise, employees who commit such heinous acts such as Chiloba’s team did would automatically be removed, at the very least SUSPENDED from office while investigations are conducted but under no circumstances would they be allowed to conduct the same elections, NO! Whatever the decision, it must be significant enough that it restores public confidence that the election will not be another circus, Chiloba’s removal or suspension MUST be real and not cosmetic. I am cognizant of the recent so called “retreat” by IEBC commissioners and staff in Naivasha to iron out issues but is simply not going to work, it is yet another example of IEBC, an unelected and unaccountable Commission, acting as the LAW unto itself. This elections are very expensive and run in TENS of Billions of shillings, for a cash strapped country like Kenya whose nurses are on strike and the rest of the civil service in disarray, I say the Chiloba team should be prosecuted and if found guilty punished severely. In the meantime, they should be surcharged for the cost of the election, we have to draw a line somewhere otherwise they will keep doing the same thing – mocking voters and passing the cost to the taxpayers, enough is enough!

The inconvenient truth is that, unlike the secretariat led by Chiloba, the Commissioners terms of service are fixed and it’s harder to remove them in the midst of these chaos, the process is too cumbersome and no time to do it. We have to be practical. Besides, I don’t blame the commissioners for Chiloba’s conduct, they are not directly involved in the electoral process, Chiloba and his Secretariat are. Commissioners are generally confined to policy and the Boardroom and in fairness, Raila Odinga shares the blame for the shambolic elections of 2017. He insisted on the removal of the Isaack Hassan team instead of focusing on process reform and the Secretariat. So we ended up with a new team of greenhorns in the Commission that were ill prepared to manage the process, I believe Isaack Hassan would have done a better job. Now look, taxpayers spent Billions in severance to send the Hassan team home, we are saddled with an equally hefty wage bill for the new commissioners and the there’s absolutely NO difference in outcome. The cost to taxpayers is exponentially higher, thanks to Raila Odinga. Personally I advocated for an oversight team to oversee the commission’s conduct, it’s simple, cost effective and efficient.

BOTH KENYATTA & ODINGA SHOULD INSIST ON CREDIBLE ELECTIONS

Make no mistake, the real person behind all this drama isn’t Uhuru Kenyatta, no no. It is his Deputy William Samoei Ruto. As I’ve stated elsewhere, Ruto has more at stake in this election than Uhuru Kenyatta and will stop at nothing to retain power and set the stage for his ascendancy to the presidency in 2022. He calls it “KUJIPANGA” (TO PLAN) and he’s been exacting and brutal. The battle isn’t between Kenyatta and Odinga, it’s between Ruto and Odinga, Kenyatta is just a front. That said, I hope Kenyatta would take the mantle and redirect his energy by insisting on reforms at the IEBC and for a credible and fair elections, the “wembe ni ule ule” war cries are not a winning formula, just saying. I say Odinga need to insist on reforms and not the dismantling of IEBC except of course for Chiloba and his Secretariat.