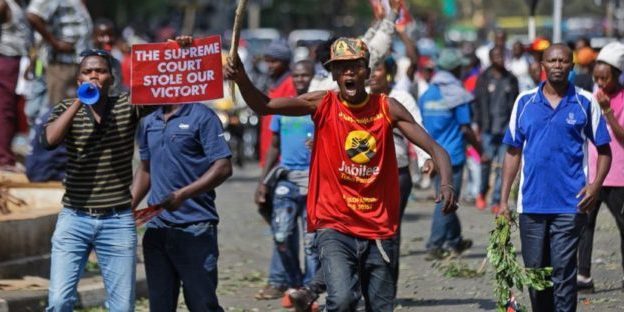 As the dust settles from the stinging landmark Supreme Court ruling that nullified President Uhuru Kenyatta’s reelection. Kenyans are finally coming to terms with its significance, i.e. how EMPOWERING it is to them. We all have tolerance thresholds to all kinds of stimuli, whether it is physical, social or political. With respect to the political on goings in Kenya, what’s your threshold? What’s absolute line in the sand trigger? For me, I drew the line at the threats, intimidation and harassment that Kenya’s President Kenyatta and his Deputy William Ruto Kenya have subjected the Judiciary to after the Supreme Court annulled his reelection. That did it for me and I have a feeling I am not alone, I believe most Kenyans, especially those who do not want to see the Constitution and our institutions, especially the Judiciary, destroyed, have also drawn their lines in the sand. Let’s call a spade a spade, Kenyatta want to be reelected so he can revenge on the Judiciary, he said it himself. Majority of Kenyans don’t want to be a part of that and refuse to participate in politics of vengeance or to aid Kenyatta avenge against the Supreme Court Justices for his  electoral loss; with his majority in both houses of parliament, I don’t want him to get the opportunity to do what he and Ruto have promised to do, NO! We don’t want to be marred by yet another protracted quagmire as it happened after his election in 2013 with the ICC, enough already.

For the first time ever, an independent judiciary acted as the final arbiter to defend and uphold the will of the people. Unfortunately, that’s not how President Kenyatta and his Deputy William Ruto saw it, quite to the contrary. They took it very hard, both men and their surrogates went berserk – relentlessly lashing out with tirades and insults at the Justices, particularly Chief Justice David Maraga. They have been belligerently petulant; they repeatedly threatened the Justices with retribution with such rage that not only put the entire country on edge but the African continent at large, they PROMISED to revisit the issue and FIX (RETALIATE) the judges if reelected in 60 days. My fellow Kenyans, it is not me saying these things, it is Kenyatta and Ruto saying these things. And with a majority that was most likely rigged into parliament, I take these two men at their words. Words matter and I believe these men when they openly threaten the Justices of a co-equal branch of government. In neighboring Uganda, Idi Amin Dada’s reign of terror was facilitated by the killing of Judges he believed were hostile to him, Uganda is yet to recover from the effects of Amin’s rule. Museveni has ratcheted up similar tactics as he exercises unfettered and unchecked powers to arrest and punish opponents. We are seeing a similar trend in Kenya, for example, recently elected Embakasi East MP Bob Owino, a knucklehead on his own right, was arrested and charged with insulting President Uhuru Kenyatta by calling him “a son of a bitch” in Swahili. He faces seven years in prison. Most Kenyans know that the “insult” is a common colloquial pejorative that is protected speech but not in Kenya, oh no. By contrast, Kenyatta’s own MP and surrogate Gatundu South MP and notorious potty-mouth Moses Kuria not only constantly insults Raila Odinga, Kenyatta’s opponent, but just a couple of days ago called for Raila’s assassination and NOTHING happened to him. There is no parity in the administration of justice in Kenya and the notion of “equal access and protection” under the law is clearly absent in Kenyatta’s government. That concerns me, it should concern everyone else too.

Kenyatta’s Jubilee government, in blatant abuse of power, unlawfully wiretapped the Supreme Court Justices, surveilled them without court warrants or probable cause, published personal details of the judges in a particularly distasteful and malicious smear campaign aimed at tarnishing their reputations. They have subjected the judiciary to extreme duress and brought so much ridicule to this vitally important branch of government. The President’s allies in the legislature have gone on overdrive with frivolous complaints and bills to obliterate the Judiciary, it is blatant – they make no qualms about it. He threatened to fire Makueni County chiefs that he believes didn’t support him, save their jobs too. In his rage, has compounded his reelection woes. He has confronted and alienated entire communities and even told them he didn’t need their vote to win, yes he did – the Turkana, Kamba and Kisii communities. To these communities I say DON’T VOTE for him, he doesn’t need your votes to win. You don’t owe Kenyatta or anyone else for that matter the presidency, so I would be an IDIOT to vote for someone who expressly tells me he doesn’t need my vote, take him at his word and DON’T vote for him, that simple.

GO TO COURT AND ACCEPT THE RULING:

When the compromised Independent Electoral & Boundaries Commission (IEBC) declared Uhuru Kenyatta’s reelection, NASA’s Raila Odinga protested. Kenyatta and Ruto counseled Odinga to take his grievances to court and to “accept” and “respect” the court’s verdict. Odinga did just that and as fate would have it, he won. So how is it that Kenyatta/Ruto give advice that they themselves can’t follow? No collusion has been established between the Supreme Court and Raila Odinga, the court did NOT invite Odinga to file his petition against the IEBC and Kenyatta; by contrast, the same cannot be said about the IEBC and Kenyatta’s Jubilee, there are convincing indicators that the two entities collaborated/colluded to manufacture the results IEBC announced. So why are Kenyatta and Ruto so belligerent against the Judiciary? By the way let me reiterate that I am not monolithic, I am neither Odinga nor Kenyatta’s supporter, I am as independent as they come. Like most fair minded Kenyans (the non-partisans) I don’t want either man robbed of their victory and more importantly I don’t want the people themselves robbed of their will.

KENYATTA BARKING AT THE WRONG TREE:

Going into a repeat election you would think Kenyatta should be on the forefront demanding for a credible election but no, besides the label of vote scammers, he and Ruto have needlessly compounded their problems and made their reelection odds that much higher. If Kenyatta truly believed he won the election, he would be blaming the IEBC for doing such a shoddy job and his own lawyers for ineffective representation before the Supreme Court Justices. Not the Supreme Court, the justices did not solicit the petition, didn’t ask NASA’s Odinga to file the petition. President Kenyatta should be leading the charge to ensure the election is conducted properly. But NO, he’s busy threatening and carrying out threats against the Judiciary, he’s not only defending IEBC’s CEO Ezra Chiloba and his secretariat that bungled the elections but he has instructed him to stay put and heightened tensions in the country in the process. Kenyatta and Ruto’s conduct only serve to advance the narrative that we all are too familiar with by now that JUBILEE and IEBC are one and the same, IEBC is beholden to Jubilee, Jubilee mockingly taunts its opponents and the public when referring to IEBC, “wembe ni ule ule”, simply put, IEBC is NOT an INDEPENDENT Commission as currently constituted, it is an extension of Jubilee.

Kenyatta and Ruto are hardened politicians who have been accused in the past of crimes against humanity at the International Criminal Court, their cases, though dismissed, were never resolved. They are capable of extreme measures and are experts at self-preservation. When their survival is threatened there is no limit as to how far they can push the envelope if they can get away with it. While their ICC cases were ongoing, the duo spared no effort or expense (of course paid by the taxpayers) to not just exonerate themselves but to go after the ICC with vengeance; they managed to coopt the entire African continent in demonizing the ICC and doggedly went after the ICC through their infamous “shuttle diplomacy” even as it was way out of their reach; they vowed to pull Kenya and the entire continent out of the ICC.  That was then, in this instance Kenya’s Judiciary is literary a stone throw away and so much vulnerably within reach, it is only KENYANS who stand between Kenyatta/Ruto and obliteration of an independent judiciary and I have a feeling Kenyans have had enough of Kenyatta’s maladministration.

PROTECT THE CONSTITUTION – The world will not end if Kenyatta is voted out, in fact it is probably a great thing because DIVIDED GOVERNMENT actually GOOD for Kenya, in other having a president from a different party/coalition compared to the legislature will slow down or prevent the two branches from ganging up against citizens. Jubilee has already started the process of steamrolling the Judiciary. So in closing I say, don’t gamble with Kenya’s future; Power exercised in the interests of the people, not Kenyatta and Ruto. DON’T GIVE KENYATTA THE OPPORTUNITY TO RETALIATE and destroy our only true shelter against government tyranny- the Judiciary, they have promised to avenge the Supreme Court ruling, they have put the mechanisms in place to do that and have started the process, the only thing standing between the destruction of the Judiciary and Kenyatta/Ruto is you, the Kenyan voter. KEEP it that way. THANK YOU!