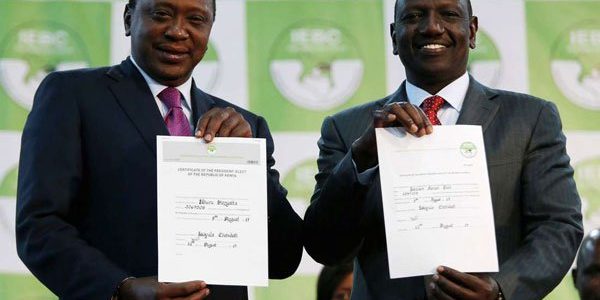 If you had asked me this question earlier last week I would have told you YES, let’s congratulate President Uhuru Kenyatta for his reelection. Even as I questioned the results relays and was troubled by Kenyatta’s constantly fixed 54/44 margin lead by Kenyatta throughout the transmitted results timeline – a major statistical anomaly. But since then, it has become increasingly hard to do so, given what we now know. Kenyans deserve the truth and their political will respected and upheld; to be led by leaders they duly elected at the ballot box and not “computer generated” ones as being alleged by NASA. Did the Jubilee government colluding with the IEBC, easily pull the biggest political heist of all time and will they get away with it? I felt that NASA wouldn’t be able to articulate a strong enough counter-offensive to sustain a reversal of IEBC’s declaration. After all domestic and prominent domestic and international observers applauded the Independent Electoral 7 Boundaries Commission (IEBC) for conducting a fair, free and peaceful elections; clearly they didn’t want to be seen to tip the outcome one way or the other and were eager to conclude the elections as quickly as possible, it appears that their overarching goal was peace even if the process itself wasn’t  necessarily credible and trampled on the very democracy they were supposedly guarding i.e. an outcome that represented the people’s will. NASA didn’t seem to have a credible valve for recourse and perhaps that was by design.

Revelations since the results declaration paint to massive rigging during the counts including alleged inflated votes for Kenyatta (ballot stuffing); ballot switching from Raila Odinga to Uhuru Kenyatta by unscrupulous and corrupt IEBC staff and agents; IEBC failing to count and announce results at the polling stations as clearly prescribed by law and reinforced by court orders points to a deliberately orchestrated plot to circumvent the law; intentional failure to provide Forms 34A – the primary source documents that are the ONLY vote counts in the entire process but instead providing Forms 34B which are a collation of 34As can only point to deception, IEBC appears to have gone into overdrive to recreate 34As to retrofit the its results announcement. I mean the anomalies in the IEBC’s counting process and the actual count are staggering and in the end it is the Kenyan votes who are cheated and deprived of their will and democratic right to pick their leaders. How did the observers miss these discrepancies and endorse the results? Why did they speak so prematurely? Why did they rush to judgment and endorse a massively flawed process at the counting of the votes, the most critical stage? This election might as well be yet another one of the biggest shams/frauds of all time.

So the question, once again, who won this election? Did Uhuru Kenyatta actually win re-election fairly and squarely? Does Raila Odinga have a legitimate claim upon which the courts can grant relief or is he crying wolf yet again? How about the voters themselves? One thing that is clear is that if IEBC cheated, it is not the candidates who lost, it’s the voters themselves and that’s why its an imperative that the truth come out. Indeed revelations during and after the elections point to a more ominous

Timeline: Let’s review the timeline as a subtext of  what really went down in the last two weeks leading to the elections

Saturday July 29 – William Ruto’s rural home in Sugoi is “Raided”  by Gunmen” and it leads to an 18 hour stand-off and “gun battle” between a contingent of security forces and the “raiders”- when it was all said and done it turned out to be a shoe hawker who was gunned down along with two GSU officers, this incident still remains a mystery

Saturday July 29 – IEBC’s Chris Msando kidnapped and murdered; IEBC’s ICT Manager in charge of vote tally transmission is reported missing, two days later he, and a lady friend, are reported DEAD, murdered and transported to City Mortuary by unknown people.  Despite the national, international uproar, the case remains unsolved and will probably remain so. Note the dates between the Ruto raid and Msando’s disappearance and subsequent murder

Friday, August 4 – NASA ICT Consultants Kidnapped; Two international IT consultants assisting NASA, one American and one Canadian are kidnapped by government agents and only released (deported) at the intervention of the American Embassy, they could have easily met Msando’s fate.

Tuesday, August 8 – Election Day: Kenyans go to the polls to elect leaders from President on down to Ward representatives. IEBC fails to ANNOUNCE results at the polling stations as previously ordered by the court of appeal but starts streaming presidential provisional results at its national tallying center in Nairobi instead showing President Kenyatta leading with a constant 10 point lead at 54/44 lead with all updates

Tuesday, August 8-9 – First Red flag as IEBC shows Kenyatta with the constant 10 point lead but fails to count and announce results at the polling stations/center; this troubles me and many Kenyans because it is statistically impossible to maintain such a constant ratio given the independent variables by way of returns from different parts of the country.  One would expect an ebb and flow in provisional results as returns came in from each camp’s strongholds. It didn’t happen here. NO polling station/center tally is done or announced on record, NONE!

Monday, August 14 – Kenya Human Rights Commission (KHRC) deregistered and its bank accounts frozen: KHRC is a leading Human Rights advocacy non-profit that battles with the government in courts on social and political issues; it was widely regarded an opposition surrogate and was expected to file a court petition contesting IEBC’s declaration of the presidential results. It is led by Prof. Makau Mutua, a distinguished law professor in the United States and an avowed critic of Uhuru Kenyatta’s government who refuses to recognize Kenyatta as president; he is ardent supporter of Raila Odinga. In a blatantly politically motivated move and frankly a flagrant abuse of power, the NGO Coordination Board claimed the NGO operates unauthorized bank accounts and owes 100 Million in back taxes, an absurd claim in and by itself because the Board is NOT a tax agency, only the Kenya Revenue Authority (KRA) can assert such claims.

Tuesday, August 15 – Africa Centre for Open Governance (AfriCOG) shut down: In yet another rabid and bizarre political move, the NGO coordination board’s Fazul Mohamed shuts down yet another opposition allied non-profit, AfriCOG. AfriCOG is chaired by John Githongo, its  board members include Maina Kiai and Gladwell Otieno; it filed the last presidential petition challenging Kenyatta’s election in 2013. Most recently, it filed a case seeking to have the Independent Electoral and Boundaries Commission compelled to open up the electoral roll for scrutiny.

Thursday, August 17 – Observers demand IEBC release Forms 34A: In what appears to be buyers’ remorse by international observers who appear to have come to the realization that they might have been fooled by IEBC’s pony-show, demand release of the forms that serve as SOURCE DOCUMENTS upon which IEBC relied to declare results, particularly Form 34A, the primary form at the polling stations where ballots were cast and counted. Stunningly but not surprising, IEBC has failed to provide this data. Instead it released Forms 34B which are NOT the ballot count forms but simply a collation of Form 34A, very bizarre and highly suspicious. It advances the narrative that the IEBC is purposely running the clock given the statutory timelines to deny the opposition the evidence it needs to file its challenge in court not. In the meantime, the release of Forms 34B and not 34As is feeding fodder to the suspicion that the IEBC is reverse engineering its reported tallies to retrofit the results it announced, in other words “cooking” the books, a major electoral fraud that must be allowed to stand.

Friday, August 18 – NASA formally files a petition before the Supreme Court: NASA’s petition in my view is unnecessarily voluminous, 25,000 pages and some have put it at 90,000 pages, doesn’t impress me as much because this is a straight forward 15 page petition to impeach the credibility of the counting process, minimal fraud on IEBC’s part is sufficient prove to the supreme court to warrant a reversal – it is the preponderance of evidence. Besides the statutory time constraints of 10 days placed on the Supreme Court to issue a ruling means NASA should constrain itself from sideshows before the court.

Finally, at the moment the truth is the will of the people is severely compromised given the allegations and revelations that have surfaced since the elections. We demand the truth, Let’s get a full recount of ALL ballots and get to the truth or simply a new election.