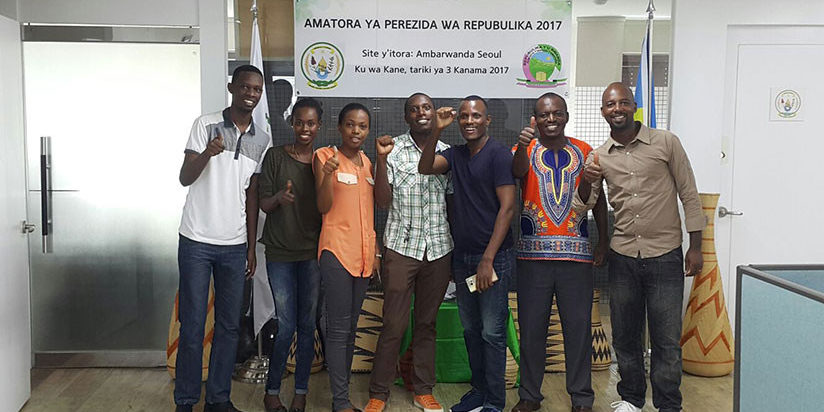 The image on this op-ed isn’t for Kenya’s Diaspora but for Rwanda’s Diaspora directing them to various US to polling centers across the United States for them to go vote, yes RWANDA; a tiny once civil war-torn country with a GDP less than 25% of Kenya’s, its economic and financial wherewithal is a fraction of Kenya’s – planning and managing elections for its Diaspora. So while Rwanda excelled in facilitating its Diaspora to vote a few days ago while Kenya has hours to go before the 2017 general elections and an uncertain outcome that has the nation on edge and yet in the face of all the hoopla and anxiety as the country treads down a potentially perilous election aftermath, one major constituency remains conspicuously absent, the Kenyan DIASPORA. Not by their own choice, nor by accident nor lack of resources, quite to the contrary – it is due to intentional disenfranchisement by the powers that be in both the Jubilee government and the opposition coalition, NASA.

They love us when they raid our wallets for our money but loathe us when we demand basic services, it is Taxation without representation folks. Make no mistake about, whereas President Uhuru Kenyatta and opposition leader Uhuru Kenyatta have sweet-talked their ways into the Diaspora’s wallets for financial support to prop their campaigns, whereas the Diaspora is a key economic engine in Kenya’s economy, whereas the constitution clearly provides for universal suffrage including the Diaspora and whereas the Kenyan courts have specifically ruled and ordered the Independent Electoral & Boundaries Commission (IEBC) to register the diaspora in time for the Diaspora to vote and whereas the Diaspora pays Billions upon Billions in taxes to the National and County government and despite repeated pleas, cajoling, demands and all else we know how to do, Kenya’s government has a whole has no intention whatsoever to let its diaspora vote. We are ridiculed, loathed and considered a NUISANCE, mere irritants, all the while they are collecting Billions and Billions from us, how does that work? How’s that fair? Someone please reconcile that for me.

President Kenyatta has repeatedly LIED BOLDLY to Kenyans abroad each time visited foreign countries and met with them, he assured them that his Jubilee government had set aside funds to facilitate Diaspora voter registration and it was his mission to ensure they voted, it was a LIE – he never set aside any such funds and never had any intention to. IEBC’s then Chairman Isaack Hassan confirmed to us that there was no political will by Kenyan politicians to facilitate Diaspora voting, his successor Wabukati couldn’t be more blunt, he and the commission simply didn’t even talk about it and when they did, they quickly dismissed it. Raila Amollo Odinga, the so-called “father of democracy” known for championing democracy simply said he was opposed to Diaspora voting because he said the vote will be stolen, you heard that? The one man who could have made a difference in this cause simply said NO because it didn’t suit his interests in his opinion. So SHAME ON YOU President UHURU KENYATTA! SHAME ON YOU RAILA ODINGA! SHAME ON YOU IEBC! Fellow Diasporas, that’s how we were screwed and left to wither in the vines.

My point is Money is NOT the problem, oh no! It is the politicians themselves and unless we take action NOW, we’ll be in the same spot 5, 10 and 15 years from now. The Kenyan government and politicians treat their Diaspora worse than they treat foreigners and worse than the Diaspora is treated in their host countries. Unlike Israel, India, Nigeria, Ethiopia and even now a small once civil war-torn Rwanda that treats their Diaspora with respect and strive to accord them as much access and benefits of citizens as they can, Kenya frowns on its Diaspora, only pays lip service with big promises followed by NOTHING. That simply MUST come to an end and time to start is now.

REVOLUTION: WE NEED TO TAKE MATTERS INTO OUR OWN HANDS

Massachusetts Senator Elizabeth Warren summed the Diaspora’s predicament very well when she once, while campaigning and lamenting on the disenfranchised Americans said this, “if you are NOT at the DINNER TABLE, you are most certainly on the MENU. The Kenyan Diaspora is on Kenya politicians and the government menu, they take our money and we get absolutely NOTHING in return, NOTHING, when will this end? Why do we put up with it and for how long? When will we have our say in the direction the country takes? Why do we allow ourselves to be relegated to the peripheries guys? When will we stand up for what’s right? In the colonial days it took just a few bold and audacious men such as Jomo Kenyatta to change the cause of Africa, they didn’t have anywhere near the resources and technology at our disposal and yet many in the Diaspora seem woefully timid to speak up; most Diaspora idolize these politicians who frankly steal from us, for how long guys? A REVOLUTION is what we need, I am NOT talking guns or war but bold actions on our part that will ensure we take ourselves off the politicians MENU and on to the dinner table where we actually have some say-so. We just have to.

Its really simple folks! We simply need to be more organized and form a formidable movement that advocates for our causes, just that simple. I think the problem is that we are too fragmented and too disorganized. That has to change as soon as yesterday. To those who can and are interested, let’s join hands in this movement, I don’t care how you get started or where but please do something about it. Enroll here at https://kenyadiasporamovement.org/diaspora-mapping/ . We have to start somewhere guys and now is the time…