LET RAILA ODINGA BE “SWORN” IN AS THE “PEOPLE’S PRESIDENT” 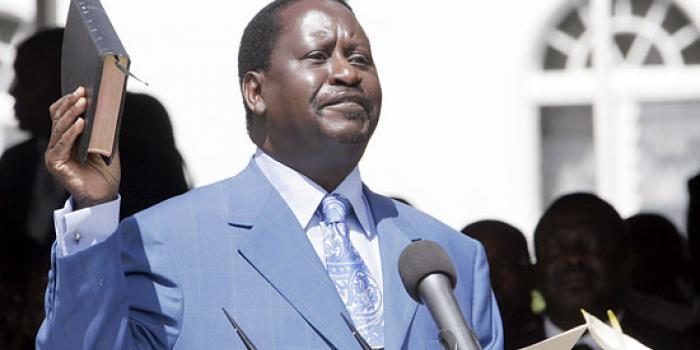 The lingering political saga in Kenya following last year’s bungled presidential elections on August 8 and October 26 is rearing its ugly head once again as Raila Odinga insists on “swearing” himself in as the “People’s President” on January 30. For all intents and purposes Raila’s swearing is symbolic and has very little effect on how the current government is constituted albeit illegitimately by most accounts. So the

Nowhere in Kenya’s laws let alone the constitution is “swearing in” of anyone prohibited or preserved for anyone in particular. The swearing is prescribed as a symbolic way to usher in new leadership in the country but it is not prohibited elsewhere in any context so derived. Raila Odinga has a massive following in the country that simply cannot be ignored or wished away and the swearing is a form of protest or mourning if you will for the chicanery they believe was perpetrated against them by the Jubilee regime and the so called Independent Electoral & Boundaries Commission (IEBC). They are still smarting from these losses and need to let off some steam, swearing Raila is a good valve to do so and Jubilee should NOT interfere. Personally I think it a good thing, and Raila and his supporters should be given space all the protections and accesses to state facilities that the law allows. If NASA is peaceful and are otherwise not infringing on anyone else’s freedoms and rights, nobody should interfere with theirs, fair is fair.

It’s clear that Raila Odinga is baiting the Jubilee regime and they are falling for it. The looming showdown is likely to result in fatalities, the police have a duty to safeguard the protesters and not provoke them as they are prone to. Kenyatta and Ruto would be better served ignoring Raila’s tantrums and let him be “sworn” in, he will not be going to occupy State House nor will he be able to issue any legally binding orders or decrees, so what is the Jubilee regime afraid of? Deploying police against Raila and his supporters by Jubilee would be an indelible error on its part, a demonstration of weakness, not strength.

RAILA HAS A LEGITIMATE CLAIM TO THE PRESIDENCY

I understand and empathize with Raila Odinga, I get where he is coming from. Unfortunately for him, he boxed himself into a corner that is so hard to extricate himself from, he gave ultimatums that Kenyatta simply ignored, he gave promises to his supporters that he cannot just walk away from and so something has to give –  “swearing in” is the least he can do, it is “SOLACE” or consolation for him, . I say let him go for it. Truth be told, Uhuru Kenyatta did NOT win the presidency on 8/8/2017, the Supreme Court’s nullification of those sham results bares that out clearly. He did not win on 10/26/2017 either, he had no competition and in fact lost against himself by a whopping 600 thousand votes i.e. Kenyatta  garnered less votes without competition than he did competing against Mr. Odinga by 600K votes, that’s hardly a win. Now to be fair to Kenyatta, Raila boycotted the election for a good reason, the decks were stacked against him but that’s no excuse, he forfeited any legal or elective claim to the throne and he has limited recourse options at this point