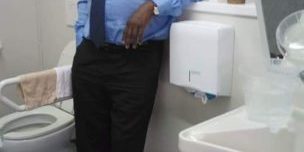 When is enough enough? Really, what’s the bottom and how do we, as a country, determine that? Most of us who follow events in Kenya are appalled at the precipitous rate the country is sinking, I just watched Interior Cabined Secretary Fred Matiang’i shirk responsibility before the parliamentary watchdog committee for his role in the rot in he has presided over in the security docket; as Matiang’i did his somersaults in parliament where he evaded questions, deflected, insulted our intelligence while denigrating and scapegoating the judiciary for his primitive and draconian manner he handled Miguna Miguna and brought shame to the country I can’t help but wonder, when do we stand up and say enough is enough?

A few months ago when US President Donald Trump was quoted to have called Africa “Shithole” countries, Kenya prominently argued that it wasn’t one of those countries Trump had in mind. I completely disagree, Kenya is exactly the kind of country that falls into the “shithole” category on account of its governance.  Barely two weeks into the famous handshake between President Uhuru Kenyatta and “the “People’s President” Raila Odinga, supposedly to put an end to divisive politics and the attendant atrocities and human rights abuses perpetrated by the Jubilee regime in the country and just when we thought the country is finally on the mend and couldn’t sink any lower, Miguna Miguna happens. The manner in which the Kenyan government has handled Miguna Miguna validates Trump 100%, Kenya is a shithole country. In international and social media, the optics of Miguna being manhandled by the police, confined to a toilet at Jomo Kenyatta International Airport and later forcefully bundled into an Emirates plane after being drugged and sedated being physically for deportation from his birth country is abhorrent to say the least, it is the epitome of a failed state, a banana republic. A country that seeks direct flights to the United States should know better than desecrate its only gateway to the world in such a crude manner, the world takes notice of such conduct.

Miguna is Kenyan – First let me demystify this, it is very simple. Miguna is Kenyan by birth. He has a birthright of Kenyan citizenship that no-one can take away from him. Nowhere did he renounce or relinquish his birthright as a Kenyan citizen. At the very least he’s a dual citizen which clearly is permissible under Kenya’s new constitution. He worked in the previous government as a high level advisor to Prime Minister Raila Odinga, nobody questioned his citizenship. Just months ago he ran for governor of Nairobi, cleared to run by the government that is now tormenting him, nobody questioned his citizenship then. The notion that Fred Matiang’i, an unaccountable and unelected bureaucrat can arbitrarily deprive him of his passport on account of citizenship or lack thereof is nefarious cockamamie, pure malarkey. To put this in perspective President Kenyatta recently bestowed the Makonde tribe of Mozambique full Kenyan citizenship, no questions asked, no passports or birth certificates or paperwork required or reviewed or examined by any bureaucrat. I can’t even begin to reconcile the government’s hypocrisy in this matter but to reiterate that it is such abuse of state powers by Fred Matiang’i that have relegated Kenya to the brink of total failure, literary a failed state where the rule of law is absolutely meaningless.

Matiang’i unfit for Public Office – If these events were unfolding in the United States and Fred Matiang’i worked for President Trump, he would have been out of a job at the blink of an eye, Trump doesn’t play but in Kenya he is perfectly allowed to perpetrate lawlessness and impunity even when it clearly places Kenya in such negative light internationally and attracts the kind of attention the country absolutely can’t afford at this time it is struggling both politically and economically. How is this even permissible?? It is no secret who the instigators of this fiasco is Interior Cabinet Secretary Fred Matiang’I aided and abetted by Deputy President William Ruto. Ruto’s notoriety as an aggressive individual is well known, and so is that of Matiang’i.

In his few years in Kenyatta’s cabinet, Fred Matiangi has racked quite a reputation as an impulsive and erratic person whose decisions have left a trail of destruction and deaths in their wake. As Education Secretary Fred Matiang’i presided over an unprecedented student unrest and official lawlessness in any sector in memorable history. Inexplicable arsons in schools suddenly became a common phenomenon and Matiang’i was quick to blame unknown cartels for the destruction. Word on the street later was that the arsons were actually an inside job engineered by Matiang’i to aid him arrogate himself power over the school system he otherwise wouldn’t have, there were no external forces burning schools. That was just the beginning, Matiang’i single handedly ruined lives of hundreds of thousands if not millions of young lives when, acting as the law unto himself, he took it upon himself for two years in a row and unbeknownst to teachers and students, decided to test 4th form students on non-curriculum material, i.e. he, on a whim and arbitrarily, tested students on past examinations that had very little to do with the curriculum they were taught. Needless to say the outcome was horrendous, I mean devastating to students and parents alike, colossal sums of money in tuition and prep went down the drain on account of Matiang’i mischief. There were even reported cases of candidates committing suicide, he couldn’t care less. As recent as two months ago it was revealed that under Matiang’i text books published by his cronies had too many clerical and academic errors that rendered them practically useless in academia and yet, once again, billions of taxpayer funds were lost in the scam.

Wait, there is more, in the lead to the general elections in 2017 Matiang’i doubled as the CS for interior and on his watch and direct command, Kenya police and other state security agencies meted untold atrocities and human rights abuses on opposition supporters under the pretext of national security, innocent Kenyans of Luo origin including innocent children and women were summarily executed. To date, not one police officer or state official has been charged for those crimes. The culture of human rights abuses is deplorable, the police have zero respect for rule of law, as recent as las week, a video emerged of a police officer torturing a motorist in broad daylight, here. https://www.youtube.com/watch?v=xooBOLmYxtM&feature=share .My point is that the culture of impunity and aura of invincibility by Matiang’i has surpassed tolerable limits and President Kenyatta

Defying Court Orders – We have all witnessed the blatant disregard and open revolt against the rule of law, Matiang’i not only repeatedly refused to appear in court and answer summons but doubled down in disobeying orders barring him from taking adverse action against Miguna, he acted like a thug that he really is, who is fooling who? 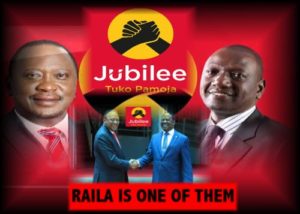 Raila Odinga Neutered himself with the Kenyatta handshake – Truth be told, the Kenyatta/Odinga handshake was self-serving and not for the interests of Kenyans. Kenya needs a strong opposition which only Odinga would provide at the time but he sold out for self-preservation. I don’t even think the handshake served Odinga well. Soon afterwards, as Raila prostrated himself at the airport as the Jubilee regime manhandled Miguna Miguna, it was clear to all who could see how lowly Jubilee held Raila Odinga, the optics of Odinga being relegated to practically a fly on the wall, hopelessly incapable of stopping the atrocities Jubilee was meeting on a man who had just sworn him as the people’s president weeks before spoke volumes, it was a pathetic scene. Jubilee could have restrained itself out of deference for Raila Odinga but chose not, don’t get me wrong,  I am not sympathetic to Raila because he deserved it but I am trying to drive the point home on how worse things have sunk, Kenyans are on their own and have no people’s champion left to defend or advance their interests.