Jubilee Has Itself To Blame For Its Reelection Woes 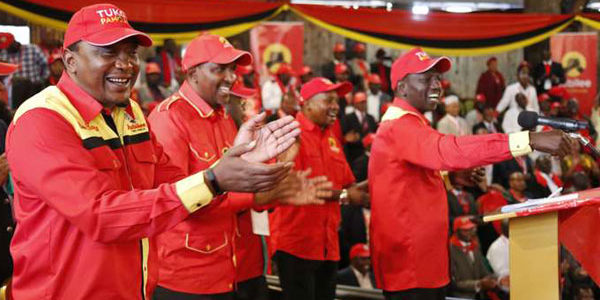 That President Uhuru Kenyatta and his Deputy William Ruto are nervous about their reelection is the understatement of the year. It has to be, how could they not be? We have been part of this rodeo since their election and watched in utter amazement AND disbelief how the hopelessly dysfunctional Jubilee government has repeatedly times mismanaged the country even on the most mundane issues of the day; Kenyans have become increasingly disillusioned by empty promises and fibs from their government that detached itself from the people from day one. Elections have consequences, we were duly warned; regrettably, we have painfully lived through those consequences and now judgment time is at hand. It is the only recourse we the governed have, once every five year in about two to five minutes at the polling booth.

When put in perspective, Uhuru Kenyatta is at a much weaker position going into reelection than his predecessor Mwai Kibaki was at the same time going into his reelection in 2007. Kibaki had turned around the economy and simply done an incredibly amazing job as president with new initiatives including the CDFs, free primary education, an 8% swing in economic growth, just to mention a few. Kenyatta, not so much. No new initiative that left the manifesto paper and translated into anything much despite the heavy indebtness. My point is that if President Kenyatta is reelected in a free and fair election, let’s at least be fully cognizant of Jubilee’s own record over the last five years and it behooves the president himself, at the very minimum, to at least acknowledge his own shortcomings as President rather than insisting that he has done a good job as president when the public knows otherwise. It makes a mockery of the people, I don’t know what’s worse, the president’s shortcomings or his failure to at least acknowledge them. I believe Kenyans are willing to cut him slack if he can contain his Deputy William Ruto who has a legendary record of antagonizing the country against the president.

This is the fundamental question that would determine the elections. Ii is two pronged in my view, if you are personally better off now than in 2013 that is 30% YES for reelecting Kenyatta, the other 70% is whether or not the country as a whole is better off now than back then, I weight it at 70% because it is for the greater good of us all. If the answers to both questions above YES, then yes vote to reelect President Kenyatta but if not, then do some soul searching folks – do not lead yourselves to the guillotine, don’t sign your own death warrants. Are Kenyans going to approve, endorse and vote to continue with the status quo or disapprove Jubilee’s conduct in office and change direction? If we the people reelect them back into office, then we deserve every bit of abuse they dish on us – the opulence they live in while the masses struggle, the massive overnight wealth looted from the public that people like William Ruto wallow and almost certainly choke in; we deserve the government we get. Fool me once, shame of you, fool me twice, shame on me, if you feel Jubilee fooled us once, will we allow them to fool us a second time? Who will be to blame? Not them, it is us.

The Jubilee government inherited the most improved government since independence; Uhuru Kenyatta’s predecessor Mwai Kibaki had undone most of KANU’s 24 years of calamities and dramatically reversed Moi’s ruinous era. Jubilee was bequeathed a robust economy, job growth, free primary education, a well-nourished nation, an optimistic electorate that decided to repudiate the International Criminal Court’ indictments against the two for crimes against humanity for crying out loud – Kenyans bestowed tremendous goodwill on the two gentlemen and rightly so. And how did they repay us?

Promises Made by Jubilee:

We believed Jubilee and their lofty promises they campaigned on: 1) One Million new jobs annually, 2) five (5) new modern “state of the art” stadiums, 3) Free laptops for each first grader, 4) Free Healthcare for mothers, 5) World class transportation infrastructure and 10,000 Kilometers of new road network, 6) Food security and Surplus production, 7) improved security, 8) tribal unity i.e. a United Kenya, just to mention a few. Kenyans fell for Jubilee’s promises hook, line and sinker, they gave President Kenyatta and his deputy Ruto unprecedented leeway and forbearance to sort their own predicaments at the ICC with the hope that the two will return the favor by attending to the nation’s needs faithfully and some level of gratitude, we didn’t even question the obscenely exorbitant Billions of taxpayer funds they spent in their defense, the frequent first class travels for them and their “supporters” to and from The Hague, attorneys’ fees, the lobbying of the United Nations, the African Union, etc. etc. etc. How did they thank us?

Promises Kept (NOT) by Jubilee:

This will be short. Jubilee has NOT kept ANY of the promises it made to Kenyans despite tripling the National debt by astronomical amounts (about 3 TRILLION shillings) with very little to show for it, a recent report on “The Standard” shows that in the next fiscal year Kenya will spend at least KSH 700 Billion shillings to repay the debt it has borrowed, that’s more than 50% of what it collects in taxes – that’s not hyperbole folks, the country is spiraling too fast into a crisis courtesy of Jubilee. There are no new Million jobs that they promised, companies are shedding jobs instead and unemployment continues rise sharply resulting in despondency and crime among the youth; there is NOT ONE (1) new stadium, let alone five (5) as promised by Jubilee, not even under planning stages much less construction; there are NO new laptops for first graders, NOT ONE (1), instead Jubilee hoodwinked the country with less than 20,000 toy tablets and not the Millions it promised – Jubilee claims that it spent almost 60 Billion shillings on the obsolete toys; the Healthcare industry is at its worst state since independence – recent Doctor strikes led to deaths of thousands of patients needlessly, another strike by nurses is currently underway and only God knows what number of causalities this will lead to; as for the 10,000 Kilometers or new road networks, except for the laughable frequent “launches” clearly meant to fool the public, only William “Tumetenga” Ruto knows where they are because the rest of the county is still looking for them; food security, we all know Kenyans are starving and are desperate, the cannot afford the basic commodities that were once common place, they are now luxuries; with respect to security, it has gotten worse, not better, our ill trained and ill equipped albeit brave soldiers are mowed down like chickens in the battlefield of Somali while the government loots reimbursements from the international community meant to compensate them, the police are not doing any better, ragtag militias have gotten an upper hand in crime, rogue police officers are killing civilians at the flimsiest excuse, so show is the country any secure than it was in 2013?; the ethnic divisions are at their highest levels ever, ethnic chauvinism, dominance and the consequent resentment, particularly against Kikuyus and Kalenjins communities are also clearly discernible.

What Jubilee Excels in:

Corruption & Looting of public funds– This is perhaps the most harmful characteristic of the Jubilee government i.e. the unrivalled and unenviable record as the MOST corrupt regime in history, it is overtly brazen, it is direct, in your face and arrogant in nature, followed by outright incompetence. Corruption  has bred unprecedented poverty and hopelessness nationally – they don’t even try to hide it because it is entrenched at the very top, it is direct, it is in your face, and we must NOT live with it unless we choose to. Whether it is the EUROBOND Billions, the NYS Billions, the Medical Equipment looting, the first grader laptops, the military spending frauds – list goes on and on – this is the best and ONLY opportunity that you can express how you truly feel, at the ballot box.

President Kenyatta is ultimately responsible for the government but truth be told, William Samoei Ruto, with all the accolades of political mastery – most of which, frankly, is hyperbole,  has turned out to be the president’s biggest liability and he may in fact cost the president his reelection. for every step forward President Kenyatta takes, Ruto somehow manages to drag Kenyatta two steps back, he has this uncanny ability to antagonize just about everyone even in the president’s own back yard in Central Province, who does that???????!!!!!!!

I don’t think Kenyatta will easily overcome his deputy Ruto’s legendary pariah status across the country – Ruto’s arrogance, insults, domineering, corruption, brutality,  and motivation to ascend to the presidency by all means necessary makes him a very dangerous man in Kenya and will most likely reverse Kenyatta’s fortunes come August 8. Ruto has relegated the president to a regional kingpin who now is busy putting out firestorms ignited by Ruto. It is a sad spectacle to watch, why does Kenyatta allow this? it is like Kenyatta is too beholden to Ruto and just too helpless to do anything about it, and I don’t even think Kenyatta is in charge of the government, Ruto is. And so a vote for Kenyatta is a vote for Ruto, make NO mistake about it and don’t be fooled otherwise.

The only saving grace is Kenyatta himself and that his opponent Raila Odinga is no lesser evil, Kenyatta still has time to turn this thing around but he simply need to act now otherwise this is not going to be a good outcome.