Billions Siphoned In Grand Corruption Among Central And Country Governments 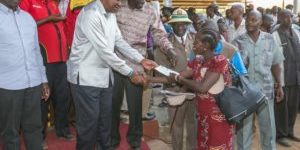 To an untrained eye, the recent and ongoing public intramural squabbles between President Uhuru Kenyatta and governors Josephat Nanok and Hassan Joho it appears like the usual political kinks we are used to but a closer look reveals a far much more sinister dysfunction within the government as a whole that is costing taxpayers and the country for that matter, Billions of shillings. Simply put, it is called CORRUPTION. The president, while vilifying the governors announced to the crowds that the Central government had sent Billions of shillings to counties but the governors in the counties dispute the amounts that they received from the central government by staggering amounts. In Turkana and Mombasa counties for example Mr. Kenyatta and his notoriously corrupt Deputy William Ruto said the central government had sent KSH 40 Billion to Mombasa County since 2013 but the county’s governor said the county only received KSH17 Billion, in Turkana they both said the central government has sent in KSH 50 Billion but Turkana governor Nanok said he only received KSH 32 Billion – both sides CANNOT be right and between the two sides figures is one clear conclusion, CORRUPTION.

The amount of Billions lost or let’s just say unaccounted for is staggering, in the two cases above for the two counties nobody can account for KSH 41 Billion of the KSH 90 Billion Kenyatta says he sent to the counties since 2013, that is 46% folks and it is no chump-change. Over the same period the central government says it has sent all counties a combined total of KSH 1.2 Trillion since 2013, projecting that amount it translates into KSH 552 Billion that is stolen or unaccounted for. So when you see governors, MCAs, MPs, Senators suddenly in limitless opulence, owning planes and helicopters, driving fancy cars and owning high end properties and buildings, you don’t need to be a rocket scientist to figure out what’s really going on. It is our money, taxpayer money, foreign grants and debt that’s funding these shenanigans and being squandered literally in front of us. Now to be fair, it is not just the central government in on this – county governments are just as guilty in this sleaze and should be equally held to account.

FIND THE BILLIONS – RECONCILE THE DIFFERENCES:

For starters, we demand a full reconciliation of the discrepancies between the central government and county government figures, where did the other Billions go to? Just common sense and to my fellow Kenyans, this is the time to get answers for obvious reasons, it is the political/campaign season, so my appeal to all Kenyans, before you vote in this coming elections, demand a full accounting by your government and elected officials, don’t vote blindly because these people in government have zero respect for you precisely because they believe we are all too stupid, too hopeless, too scared and too naïve to question them. NOTHING and I mean NOTHING will change if we let these people get away with this brazen highway robbery, it will only get worse folks. On the other hand if we hold to account and replace them as necessary, we would be sending a clear message to not only these current kleptomaniacs in government but also future governments that we have had enough of being robbed and being taken for fools and that we will hold you accountable – time is NOW.ngly exposed how colossal sums of money simply disappears