BUILDING DEMOLITIONS NOT THE ANSWER 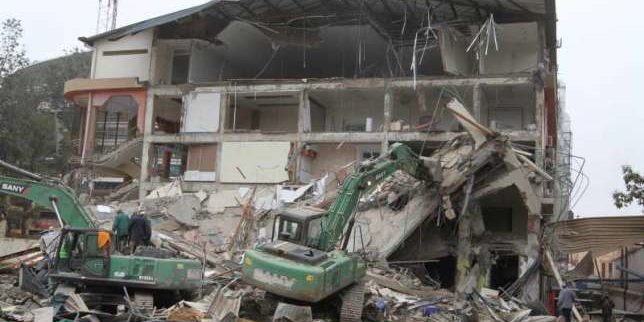 President Uhuru Kenyatta’s renewed fight against corruption in refreshing, commendable and certainly overdue. It proves that the President, contrary to earlier statements that he couldn’t anything more to stop the vice, he actually can and he’s doing it. By and large Kenyans welcome the President’s vigor in getting rid of vice and recovering stolen public property. This fight is something that should have been undertaken long ago and I realize politics got in the way wherein high ranking administration officials siphoned Billions of shilling and amassed too much wealth too fast in return for political support of the party in power, I get it – it is political expediency but that era seems to coming to and end. So I say KUDOS to the president and his team for finally taking a tough stand on this.

Demolitions bad for the economy and erode  Investor Confidence – It is no secret that Kenya’s economy is underperforming and  there is no doubt that the government believes that demolitions of properties built on riparian lands is the right thing to do, but is it? The optics of buildings being bulldozed in the city in a struggling economy sends the wrong vibes, of a nation run amok and at war with itself.  I am viewing it from the prism of the President’s stated BIG 4 Agenda in his second term and wondering if this helps advance it or scares away would be investors. Think about it, the lands where the buildings that were sitting on were not illegally obtained, at least the state has NOT made that assertion. The state not only issued the title deeds to the lands but also the building permits, it is NOT an epiphany to the state that these were riparian lands. Developers relied on these state issued titles and permits to develop the lands, some have been sitting there for decades and nobody say anything, meaning the state voluntarily forgave these constructions when it issued permits and hasn’t said or done anything for years, it is condonation. The state’s actions in this regard are peremptory and uncalled for; Kenya does NOT have ex Post facto law, , constitutional or statutory, that would permit the state to punish anyone retroactively, I am not aware of any.  So it befuddles me and most Kenyans that now the state has reversed itself and is demolishing Billions of shillings worth of developments, subjecting owners to untold losses and rendering Kenyans in their thousands jobless. What do you think investors and potential investors in real estate in Kenya are thinking about this? The message to investors is clear, you cannot trust any covenants you enter into with the Kenyan government, you cannot trust their title deeds or their development permits because it is only a matter of time before a new administration deems them illegal and ruin your investment. This action by the state erodes investor confidence in Kenya, pure and simple.

Fight Corruption not red herrings – Most Kenyans are very supportive of genuine fight against corruption, not property destruction scapegoating it as anti-corruption crusade, that framing doesn’t wash.  Property developed on riparian lands is a resource management issue not corruption. The fact that the state made errors in granting permits for these developments is no excuse for the it to deprive owners of the same and render innocent Kenyans jobless, we can’t tolerate that. Innocent parties shouldn’t bear the brunt of the state’s mistakes, past and present. So now Kenyans face double jeopardy because sooner or later the owners of these developments will bring action against the state courts and are likely to prevail, meaning the taxpayers will needlessly be saddled with awards and  legal fees that we can least afford. The irony in all these is that while the state is punishing investors who properly acquired and developed land, it is not going after or sought any recourse or taken any action against the several known developments that were corruptly acquired and developed such as the Weston Hotel owned by Deputy President William Samoei Ruto, DP William Ruto stole public Land to build Weston Hotel. We demand equity, equal access and protection under the law, we cannot have two tiered application of the law. Now, I am advocating for more demolitions but the state must punish graft while preserving the capital invested in the corruptly obtained developments. Convert WESTON into into a public use development for example.

Halt demolitions & Reroute the Rivers – Development in Riparian lands is nothing uncommon, around the world in developed and indeed underdeveloped countries, cities are built around or even on water, Venice, Amsterdam, Chicago, New York, Migingo Island and many other Islands around world, man has figured out a way to create development and co-exist with nature, Kenya is no exception and this is just the wrong time to feign righteousness. We have to manage the resources better, both natural and man-made, not destroy them. We have the technology that expands rivers and lakes, reroutes others and I just don’t think officials in Kenya have thought through other possible remedial alternatives before they decided to destroy these properties, stop the madness now folks.