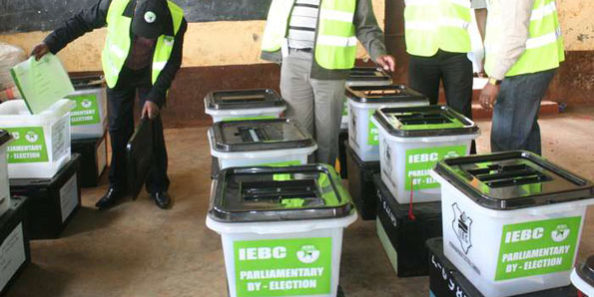 As Kenya enters the home stretch of this political season, assuming reason fails to prevail as the Independent Electoral & Boundaries Commission (IEBC) ignores overwhelming public reservations and court rulings against the commission’s conduct and instead proceeds with the general elections on August 8, 2017 anyway, the chances of having free, transparent and fair elections are slim to none. It will be an indelible error of judgment on IEBC’s part after being extended multiple lifelines by the courts to change course and repeatedly fighting against the tide. IEBC has squarely positioned itself as the villain that always jinxes the country’s fortunes and makes former President Moi’s reign was a benign democracy where elections were fair. In the current environment the IEBC & the courts conundrum means will take a herculean effort to conduct free and fair elections and I still insist that the elections should be postponed.

President Uhuru Kenyatta and his deputy William Ruto are on record threatening the judiciary for ruling against the IEBC. The IEBC is subject to the jurisdiction of the Kenyan courts just as is the president and everyone else in the country, it is called the rule of law and it is defined in the confines of constitution. The IEBC must abide by the court ruling(s) otherwise its actions would be void or voided. In this instance the High court ruled that it must re-tender the Presidential ballots and invite the public to participate in that process; without delving into the details or merits of the ruling methinks the court struck a good balance or isolating the contentious issue of presidential elections and addressing it as fairly as it could –under the circumstances. There  are a total of five different categories of contested elective offices in the country; i) the President ii) Senator iii) Member of Parliament (MP) iv) Governor and v) Members of County Assembly (MCA) –I think we have a bloated government but I digress. Only the Presidential election generates the most heat and controversy and so it makes sense that it is addressed as judiciously as possible, first by the IEBC and if IEBC fails like they have, the courts step in. That’s what the courts did in this case, three times the courts have ordered the IEBC to retender the ballot papers to remove the cloud of suspicion and controversy that hangs over this issue and how did the incorrigible IEBC respond? Yes you guessed it; they will appeal it to the Supreme Court, 25 days to elections. You heard that?

The court even made their work easier by placing just ONE (1) requirement that the IEBC allow public participation, very straight forward and simple you think, right? No! To meet this threshold the commission has resorted to feigning public participation by inviting the presidential candidates to participate. We all know that NO Meaningful public participation can take place by inviting just the 10 candidates, that’s not public participation but a committee exercise. They are playacting and making a complete mockery of the courts – they have been buoyed and emboldened by resident Kenyatta and his Deputy Ruto who have indirectly threatened harm to the judicial officers, that courting anarchy. The IEBC and the Jubilee duo are setting themselves up for massive failure, they are providing Raila Odinga the ammo he needs to call for MASS ACTION on August 8 unless he’s declared the winner, why give him such a huge advantage to dispute the elections outcome? The commissioners are incompetent, tone deaf, willfully ignorant or whatever else you want to attach to these managers. Like I said before if violence breaks out after the elections I want them LOCKED UP!

Notwithstanding all the IEBC and Jubilee shenanigans, I think that there are some basic low hanging me measures that the IEBC can take to mitigate the perception that they are compromised so the elections can considered semi-valid. With respect to ballot papers, I would like the ballots to leave an audit trail; I want to see color-coded , sequentially pre-numbered ballots with unique serial barcode and numbers that can be traced back to not only the printer but also directly to the polling station itself.  I believe that will mitigate rigging because it eliminates the likelihood that the ballots can be stuffed by IEBC because ballots will be polling station specific and can only be used in that station – additionally the ballots MUST match the registered voters assigned to the station, ward, constituency and County. In other words a trained person should be able to look at a ballot and tell exactly where that ballot is supposed to be cast. In the event of a dispute and audit by the courts for example the voter biometrics on the ballot can be easily traced and cross-referenced against the IEBC voter register to determine if it’s a valid vote or not and if it was properly cast. How you may ask? Simple, a voter registered in Starehe constituency shouldn’t vote in Kamukunji Constituency for example. Now if we audit Starehe and find Kamukunji designated ballots and/or vice versa then we know those are invalid ballots that will need to be thrown out. And since these voters shouldn’t have been allowed to vote in these constituencies to begin with, we would know the ballots were stuffed (rigged). Second, if ballots are serialized and color-coded according to their designated polling location, again, it removes the incentive to print extra ballots. Voter cards must also be treated the same as one time use voter-cards.  On election day, candidates’ agents will conduct an actual headcount of voters at each polling station, the count must a) match the match the total number of votes cast and b) must not exceed the number of registered voters assigned to the station by the IEBC.

For example, the serial numbers for Nairobi County ballots can start at 01470135001 wherein the numbers mean 01-Kenya; 47-Nairobi County; 01-Starehee Ward (an example); 35001-voter # 35001 and in this case if we know that Starehe has 35001 voters, IEBC should not have more than 36000 ballots printed for Starehe, which includes provisional ballots and spoilage. We can even have these ballot serial numbers expanded to include polling centers themselves such that  014701031001 denotes, 01-Kenya; 47-Nairobi County;01-Starehee Ward (an example); 03-Polling Station # 03; 1001-vote # 1001. IEBC should show us the specimens. On Election Day, it will be nice to provide the voter with a receipt as well.