Preserving The Republic – Are Kikuyus Better Off Without Kenyatta As President 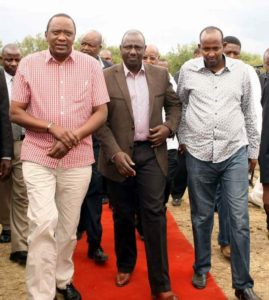 We are at the home stretch of the 2017 election cycle and soon the silliness will dissipate. If it were up to me, I would postpone the elections but that ship has sailed, no point in crying over spilled milk at this point, I say let’s just brace for impact. All else being equal and pretending Uhuru Kenyatta didn’t chicken out of the presidential debates and ignoring the Jubilee party’s coonery; corruption, the quadrupled debt, the numerous multi-sectoral strikes, the starvation, the debt, the insecurity, the unemployment, the declining economy, the inflation, and so on and so forth, the question is, does Kenyatta’s presidency help or actually hurt Kikuyus? I have been mulling over the pros and cons of the two major candidates for president i.e. Uhuru Kenyatta and Raila Odinga – so in the remaining days to August 8, my focus in these two men and the conduct of the elections and this installment my guileless opinion is about Uhuru Kenyatta with an emphasis on the unspoken repercussions of his Presidency to Kikuyus. The question is – are Kikuyus best interests served by Kenyatta’s presidency or should Kenyatta be replaced to preserve the greater interests of the Kikuyu nation?

Contest Is Between Raila & Ruto

To answer this, look no further than at his deputy William Samoei Ruto in this review. Ruto is the 800 pound gorilla that makes or breaks Kenyatta’s re-election chances. Five years ago I said that then candidate Uhuru Kenyatta made a big mistake and will one day rue the day he picked William Somoei Ruto as his running mate. He is perhaps the most controversial and loathed politician Kenya has produced in a very long time, the man is just radioactive and therein lays Kenyatta’s fate because a vote for Kenyatta is a vote for Ruto. If majority of Kenyans are convinced of William Ruto’s worth to Kenya and Kenyatta, then Kenyatta will be reelected but if not, Kenyatta is toast. Make no mistake about this folks, this contest is not between Kenyatta and Odinga, noooo! This contest is between Raila and Ruto, two mortal protagonists; Kenyatta is a proxy, a front who governs vicariously through Ruto.

For all practical purposes, William Ruto, by his own bragging, runs the country, not Uhuru Kenyatta. Kenyatta is a follower in his own government. Ruto has used his position to advance his own agenda in the most nefarious ways imaginable. He’s certifiably the most corrupt government official in the country, the most arrogant, the most vindictive, the most antagonistic -he has antagonized Kikuyus and even the president’s inner circles,  and on and so forth. On his own Ruto will fall on merits alone, he’s a pariah and yet his association with Kenyatta puts him a heartbeat away from the presidency; he’s too ambitious to fail and would do anything and everything to retain power in this campaign in 2017 for the 2022 vacancy. In this campaign Ruto certainly has the most to lose if Raila wins, not Kenyatta. The only way William Ruto can avoid being held accountable for his epic and legendary misdeeds is if he’s in power, he knows it and he will do anything, hook and crook, to retain power. That makes him an extremely dangerous man.

Uhuru Kenyatta Is Not The Problem, It Is Uthamaki-Stupid!

Well he is actually the problem insofar as the buck stops with him as the president but not entirely, in my humble opinion Kenyatta is captive and beholden by the cabals around him starting with William Samoei Ruto. So to those Kikuyus, especially the ones who espouse UTHAMAKI (the Kingdom) who believe the UHURUTO phenomenon will help preserve that, knock it off, that’s a DEAD-END. UTHAMAKI advances resentment and negative ethnicity, ia m sure you have witnessed that already. I say straighten yourselves and stand with the rest of the Kenyans to advance the greater good of the Kenyan Kingdom, not the Kikuyu Kingdom.

Ruto is an existential threat not only to Kenya as a nation but also to Kenyatta himself; sounds farfetched but it is true. Naturally, Ruto believes he is entitled to kikuyu support in in 2022 and that Kikuyus are beholden to him but the conundrum maybe too big for Ruto to overcome; on the one hand he has tripped himself way too many times and burned bridges with rubbed many would be Kikuyu supporters the wrong way, he simply has burned too many bridges, antagonized even the president’s own and I don’t think Kenyatta himself is alive to the peril his dalliance with Ruto has subjected Kikuyus to. And this brings me to the crux of my theory; all else being equal Kenyatta’s second term will imperil Kikuyus’ short and long term interests, not help them. Holding Kikuyus beholden to Ruto on account of Kenyatta puts Kikuyus on a collision path with Kalenjins once again notwithstanding the apparent truce between the two communities; the “relationship” is superficial at best.

Given the bad blood percolating out there between ethnic communities, perhaps it makes sense for Kikuyus to reconsider their stance on UTHAMAKI and ultimately Uhuru Kenyatta himself. Kikuyus relationships with other communities are tenuous at best; there are only two ways I can think of for Kenyatta to extricate himself from this quagmire; a) fire Ruto or b) the people themselves get him out harm’s way by voting the two men out of office. Kenyatta has adamantly refused to heed advice and loud protests against Ruto, so the only recourse left is on August 8.