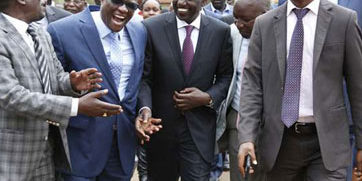 When I think of Kenya’s political ecosystem and last week’s passage of the2016 Election Laws (Amendment) Bill and the Election Offences and the forthcoming formal Jubilee Party merger meeting this coming Thursday September 8, 2016 I am reminded of the old adage, “fools rush in where angels dare not tread” specifically because of how Kenya’s parliament was quickly steamrolled, intimidated and rolled over by the coalition principals to pass the law in record time without as much of any debate, I mean that was epic. To many Kenyans, when they realize what really the law means, it will probably go down in history as one of the worst affronts to the constitution and democracy by parliament. It is one of the follies Kenya’s law makers are notorious for, just doing things on a whim and passing laws without really thinking through what they are signing onto. The law, designed and supported by the principals of the major political coalitions including President Uhuru Kenyatta and opposition leader Raila Odinga to preserve their political interests, bans politicians from switching parties after nominations.

On the surface it looks and sounds reasonable– well that is until you really take a closer look. Truth is it was motivated by selfishness to secure the interests of the principals and nobody else, pure and simple. So how would you level the playing field if you are forced to sacrifice your own career and deny your employer an opportunity to decide on whether or not to hire you? What’s the antidote to this? If I were these parties that have either dissolved themselves or considering to do so to join the major parties, I say RECONSIDER – DON’T DO IT. And here is why:

Kenyatta doesn’t need the Ban to be re-elected – President Kenyatta’s reelection chances are better than any of his opponents. I understand the political clamor to change the law, it is really for self-preservation and shows how insecure both Jubilee and CORD coalitions are with voters in the upcoming elections. The parties are afraid of the blowback that is guaranteed to follow after the nominations which are invariably rigged but that’s no excuse. Truth is the opposition is at its weakest point and President Kenyatta has consolidated his base and expanded it better than Raila Odinga has. Kenyatta doesn’t need this law to be re-elected, the ones who desperately need it, however, are William Ruto and Raila Odinga, they have been hemorrhaging their supporters. You don’t need to be a political expert to notice that the rancor among rank and file membership and leadership has been in URP and ODM for their heavy-handedness and crooked way they run their parties as one man dictatorships, not TNA. CORD is on the brink of disintegration because they cannot agree on a flag bearer. Ruto’s URP has already broken up as Bomet Governor Isaac Rutto has peeled a significant number of supporters from the outfit. TNA on the other hand seems not only intact but also attracting new memberships. Go figure! So how and why Kenyatta got ensnared in this nonsense to begin with befuddles me – I hope he doesn’t sign this archaic law. Kenyatta’s reelection doesn’t hinge on this law. Raila’s chances in 2017 are dependent on it and so are William Ruto’s in 2022.

Parliament surrendered its standing as a co-equal branch of government – The feckless, spineless Parliament subordinated itself to the executive by caving in to intimidation and arm-twisting by the principals, in other words parliament simply ceded its constitutional standing as a co-equal branch of government that that was supposed to guarantee checks and balances between the other branches. According to reports published in the Dailies, Deputy President William Ruto called legislators to his Karen home and essentially bullied them and threatened to hand nomination papers to their potential opponents unless they voted for the bill, just classic William Ruto. ” Lawmakers affiliated to the coalition met at Mr. Ruto’s official residence at Karen and agreed to support a change to the existing electoral laws to bar contestants from changing parties after losing nominations.. They said those who would not accept the coalition’s position would be asked to quit.” Cecil Mbarire described their meeting with Ruto as a “LIVE WIRE” describing the manner in which Ruto intimidated MPs to sign on to the law, http://www.standardmedia.co.ke/article/2000214204/shape-up-or-ship-out-ruto-tells-mps . There’s something perilously ominous with this picture where representatives of the people answer to Ruto and not the people they represent – it is just wrong. It means that ultimately the people themselves have no say so in the affairs of their own government.

Voters Disenfranchised – In the final analysis, voters will lose if the bils become law. Whether intended or not, this is the real effect of the law. It has no recourse mechanism for voters, they are stuck with whoever Ruto or Raila’s cronies. So what happens if and when popular candidates are passed over by the head honchos at party headquarters? We have seen this scenarios play out umpteen times in the past where cronies are imposed on voters where voters are left with no recourse to elect their preferred candidates. In some instances nomination tickets/certificates are out rightly sold to the highest bidder are substituted cronies or the nomination certificates are for sale. In 2015 in Kajiado Central for example, ODM’s candidate Elijah Memusi initially vied on Jubilee’s platform but jumped ship in protest of electoral malpractices in Jubilee. Memusi went on to win the by-election on the ODM platform and replace Gen. Joseph Nkaisery in parliament. My point is, it is not the parties that voters care about but the leaders themselves and under the new law, the people of Kajiado Central would have been denied this choice. And this is not isolated to Kajiado, it is all over the country – it just has to stop.

Political suicide – For Pete’s sake, I still don’t get it why these MPs would sign on to a law that could be a death knell to their own careers, it is a risky maneuver on their part, playing Russian Roulette on their own careers. Not that it matters to me one way or the other but if these folks are this acutely incompetent as to lead themselves to the guillotine, maybe they deserve it and perhaps they have no business being elected to parliament in the first place. Good riddance.