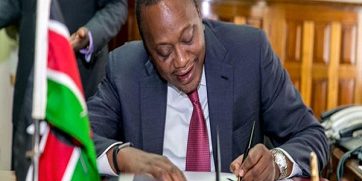 I believe I speak for most if not all common Kenyans by saying that President Kenyatta’s signing the anti-usury law capping interest rates bill is one of his most consequential legacies of his presidency. Not just because it is a welcome relief to debt-ridden Kenyans and businesses who have been on a perpetual uphill fights against immoral predatory lending practices of a rogue banking sector but also because he is responsive to the woes of Kenyans who stand to benefit most from this action. It helps him politically too because the high interest rate regime that has been a major stranglehold on the Kenyan economy has also been tied to special interest groups of the high and mighty, Kenyatta has demonstrated that he’s not beholden to this class and can break away if and when necessary, that’s a good thing.

Default risk not an excuse – Banks tried to argue that they charge the high rates because of default risk but they refuse to own up to the fact that they actually significantly contribute to defaults by charging such obscene rates in the first place. There failed to show evidence that lowering rates would result in higher defaults and so theirs is backwards actually. Truth is banks are “money merchants”, they sell money as inventory no less than a farmer sells his/her crops for a profit. The difference is the banks really don’t own the money they lend, well initially they didn’t and even today most of them actually don’t, it is depositors’ money that banks pay paltry interest to depositors but turn around and lend at very high rates, the difference or spread is used to pay bills and for profit, obscene profit I should add. It is the profit that needed to be reined in because it is predatory and hurts the economy.

Taming inflation – Inflation by definition is the increase in prices and fall in the purchasing value of money and that has been clearly evident in Kenya for a while now. Higher interest rates mean higher cost of doing business which is passed on to consumers in the form of higher prices hence lowered purchasing power of money i.e. inflation. That needs to be tamed and my concern is that the rates are still too high.

How taxpayers benefit – This act by parliament also means that we the taxpayers should get relief from the high interest payments the government makes in domestic borrowing. These funds can then be redirected to fund development projects The Central Bank reference rate is considered the “risk-free” rate, which is the rate the government borrows or should borrow. That being the case, I say the Central bank

First, methinks the Central Bank should revise its reference rate down further because it is the right thing to do – the economy needs it. As it is now this new change is clearly not going to go down well with most banks as their profits will be negatively impacted, already it has been reported that the banks shed KSH45 Billion shillings in value within days of the president signing the new law. So it won’t surprise me that they will try new creative ways to make up for the difference in the form of new fees and charges assessed to borrowers and depositors. If the banks are allowed to do this, it will render the new law practically meaningless as it defeats the purpose for which it is intended. Parliament failed to tighten loopholes in the new law and left the door wide open for banks to get creative and substitute lost revenues with other equally nefarious and exploitative charges on consumers, we must keep the banking sector on its toes and ensure its fidelity to the new rules. Secondary lenders “Shylocks” should similarly be regulated to even the playing field.

Not sure if many of you remember this but when MPs were finally required to pay income taxes like the rest of us, they protested strongly and to placate them Deputy President William Ruto brokered an agreement that raised their pay to make up for the tax and they also received other benefits like grants that they didn’t have before. So in a nutshell they pulled wool over our eyes and played tricks on us, it actually ended up costing us more than it otherwise would. My point is we must be vigilant to ensure the banks don’t find a way to circumvent the law.

All in all, good job Mr. President.