BBI -YES OR NO? UNPACKING THE TRUTH ABOUT THE BBI REPORT (Part 1 of 4) 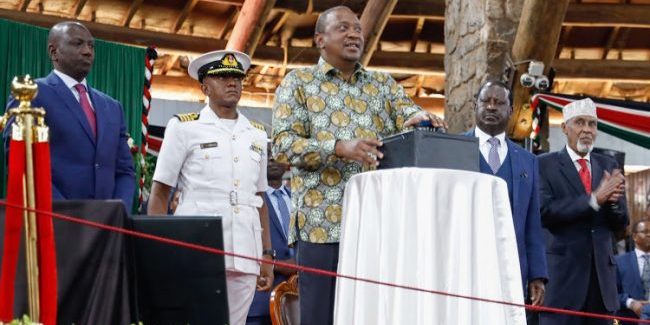 Folks, the long awaited Building Bridges Initiative (BBI) report was finally released on Wednesday November 27, 2019 at Bomas of Kenya in what was heralded a historical occasion that will mark a new dawn for Kenya. Forget the BIG 4 agenda, the BBI has effectively substituted President Kenyatta’s signature initiatives as topmost priority to improve the lives of Millions of Kenyans’ lives. Launched by both Kenyatta and former Prime Minister Raila Odinga following their infamous “handshake” after the 2017 presidential election fiasco to find lasting solutions to the perennial violence every election cycle, it is touted as the way to peace, unity and ultimately economic prosperity in the country, that is according to Kenyatta and Odinga.  For starters the fact that we as a nation are talking of BBI and not President Kenyatta’s signature BIG 4 Agenda is itself tragic.  To an undiscerning eye and the public in general, many of whom haven’t read the report and probably will never read it, the report appears and sound like the answer to the country’s problems.

However, a closer look at the report i.e. the underlying premise, findings and recommendations paint quite a different picture than how it has been packaged and it behooves ALL Kenyans wherever they may be globally to take a closer look at the report so they can make an INFORMED decision, yay or nay. We do not want make fools of ourselves again, as the old adage goes, “fools rush in where angels fear to tread.” For way too long Kenyans have been wrongly indoctrinated to believe the government is the solution to their problems when in fact the opposite is true, the government is often the problem and the BBI epitomizes this. For example the Taskforce hits high notes on shared prosperity that sounds good and populist but then it pegs prosperity on the state. Shared prosperity must not mean wealth redistribution, it must be about wealth creation. It must not mean a Karl Marx model of society of a nanny state where folks expect free care and stuff from cradle to grave; “From each according to his ability, to each according to his needs” (Karl Marx, 1875); it is the antithesis of capitalism and democracy, it is socialism.

Leading up to the 2010 Constitutional referendum, majority of Kenyans were led to believe by the politicians who proposed the document that it was a perfect document and that they should endorse it at the ballot box because they, the politicians had read it. Indeed, it passed by a landslide yet here we are less than ten short years later being asked to change it; déjà vu all over again folks. So let’s be very careful, my take on this is simple “fool me once shame on you, fool me twice shame on me”, Do Not Be That Fool that gets fooled more than once!I say this to say – before you approve or reject it, READ the document, especially the “fine print” because the “devil is in the details” as the saying goes. If you can’t read it because you do not have access to a copy or for any reason at all, DO NOT approve it.

DISCLAIMER – I am one among the thousands of Kenyans who submitted views to the Taskforce of which they acknowledged and listed my name as one of the hundreds the contributors. The Taskforce did not include or attach annexures of the public’s submissions as full disclosure for the record as I believe they should have. Notwithstanding, I have read the report and whereas I do not pretend to have all the answers of what the report should have addressed and that what I am sharing is MY own opinion of the report in it is current form, I am cognizant of the fact that there are literary millions other opinions since this is a national debate and mine is just one of them. From a reading standpoint, methinks it is needlessly repetitive and verbose, in some instances it is incoherent and rambling, laden with fluff and red herrings that can only be construed as ruses to achieve the predetermined goal. Accordingly, my assessment may come across as adversarial and confrontational and I own up to that, I call that being blunt and “keeping them honest.”

Report Summary Conclusion –Let me make this observation mightily clear; Were former Prime Minister Raila Odinga President today, we would NOT be discussing BBI, do you follow me?  President Kenyatta and his erstwhile protagonist Odinga have made no qualms or secret why they initiated the BBI, to unite the country that is divided following each election cycle every five years. Considering this cardinal premise as the primary reason for BBI,the remedy to the problem is NOT BBI, it is fixing the flagrant loophole in presidential election act that manipulates the tabulation of the presidential election, specificallySection 39 (1c) of 2011 Revised Edition 2016 of the elections Act that the governments in power exploit to rig elections and stay in power. The section reads in pertinent part, “For purposes of a presidential election the Commission shall —(a )electronically transmit, in the prescribed form, the tabulated results of an election for the President from a polling station to the constituency tallying center and to the national tallying centre;(b)tally and verify the results received at the national tallying center; and(c)publish the polling result forms on an online public portal maintained by the Commission.” This act need to be REPEALEDand aligned it with the Constitution’s Article 138 clause 3 Section c that reads, “After counting the votes in the polling station, the Independent Electoral and Boundaries Commission shall tally and verify the count and declare the result.” This means a uniform electoral process from top to bottom and bottom-up wherein votes are cast, tallied, results announced and certified at the polling centers, no opportunities for the kind of shenanigans we witnessed in 2017 where results were clearly tampered with during the so called “electronic transmission”. This is common sense, no constitutional change is necessary for this change to take place. And with this common sense approach, the BBI as currently constructed will be a moot point and obsolete.

Therefore, I say consider the source of BBI. Kenyans are not beholden to anyone or any special interest groups. What Kenya needs is a comprehensive approach in correcting the anomalies in the current constitution which everyone now acknowledges is far from ideal, not piecemeal fixes here and there every so often to suit the political class’ whims. The details of the report are summarized below for each chapter i.e. chapter one through eleven where I summarize each chapter’s findings, recommendations and my own analysis in that order. It has a very narrow focus and ignores the real problems that everyday Kenyans face. Except for two chapters, 7 – shared prosperity and 8 – corruption respectively, this BBI report is centered on ONE thing and ONE thing only – the expansion of the size and scope of government via the establishment of a powerful UNELECTED Prime Minister to usurp the people’s power bestowed on the elected president and run the government. Given its massive funding in hundreds of Millions or Billions of shillings of taxpayers’ money, the report is underwhelming insofar as it’s limited scope of creating a few positions at the top echelons of government and failed to address the real major flaws in the current constitution and the issues Kenyans face every day. (As a disclaimer for the record I did NOT get paid to conduct this review). Simply put, Kenyans did NOT get value for the money invested in the Taskforce.

Whereas most of its findings are actually accurate, they are not new to Kenyans, in other words the Taskforce did not break any new ground or reveal anything we already did not know. Kenyans would have been better served and more appreciative of the Taskforce if it came up with actionable, practical and innovative solutions that can be enacted through constitutional amendments and or legislatively. Instead, they misdiagnosed what truly ails the country and consequently provided the wrong remedy that will not fix anything. None of its recommendations rise to such a level of legislative or constitutional remedy, they missed the mark by a long shot and fell short instead, came back empty handed. It is very possible and likely that majority of Kenyans who the politicians consider “voting robots” and “pawns” will still vote to approve it. That’s the tragedy of it all that must be avoided by all means.

The “Winner take all” fallacy is a recurring theme that is being scapegoated for all the ills in Kenya and yet we know that is NOT the case at all. There are NO participation trophies in a democracy.  Besides Kenya is not a “winner take all” country per se because it is a multi-party democracy that adheres to the principle tenets of democracy of “majority rule and minority rights”. This winner take all crazed argument is only being raised at the presidential level, nowhere else. We can’t elect more than ONE president at a time and so there will always be ONE winner and multiple losers, which is quintessential democracy. Democracy is a competition of ideas where voters decide what ideas they agree with at the ballot box and where all other rights are protected. Thomas Payne once said, “Voting is a right upon which other rights are protected.” To then denigrate these fundamental democratic principle as the reason for discord in the country is absurd and disingenuous. We cannot reinvent or redefine democracy or retrofit it suit the whims of the political class who lose elections. We need to strengthen democracy by eliminating cheating and rigging elections so voters’ decisions are upheld and respected at all times. Adulterating democracy isn’t the answer. Election losers need go back to the drawing board to retool the ideas for the next election cycle and drop this preposterous and asinine notion that election losers should be incorporated in government, absolutely NO!

The Taskforce also made great observations and recommendations about the Diaspora role in the country’s development albeit in passing. The Diaspora’s remittances are a key economic engine in Kenya that contributes at least 50 Billion shillings in taxes to the exchequer and yet an ignored constituency, effectively taxed without representation. The Diaspora’s remittances are Kenya’s single greatest economic engine that surpasses any other including Agriculture and Tourism and yet there is NOT ONE single formal entity or secretariat to partner with the government in a formal setup to grow capital flows and investments to Kenya. There is an urgent need for establishment of Diaspora specific units in government including a full Cabinet level Ministry in the Office of the President dedicated to the Diaspora and the President’s Economic Development & Entrepreneurial Council to develop an economic development framework that incorporates the Diaspora.

Wherefore, in light of the aforementioned and the expanded review below, my opinion and conclusion is that, the BBI report in its current form, just like the rejected Punguza Mzigo” initiative championed by the former Director of the “Committee of Experts” Dr. Ekuru Aukot, who helped author the current constitution in 2010, should be REJECTED. However, should the Taskforce reconsider its position and adopt the missing matters as outlined below, Kenyans should consider the proposals in the 2022 General Elections, not before.