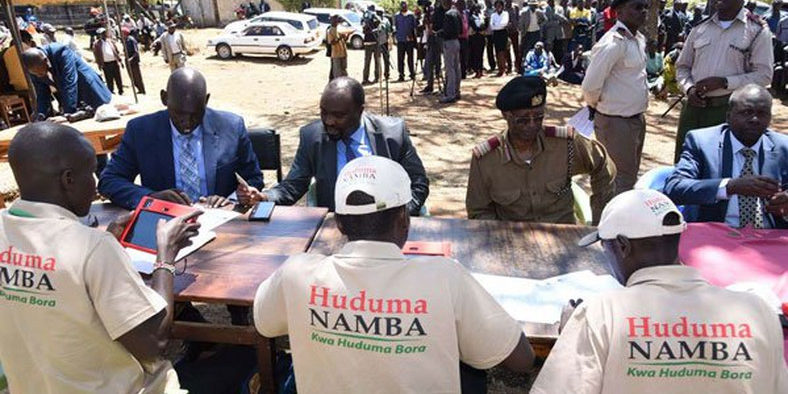 VOTER REGISTRATION FIRST! I know the title of this article is bold and most likely to provoke controversy, it is by design and I am asking you to keep an open minded. Days ago Kenya’s President Uhuru Kenyatta announced an extension by one week, the government’s ambitious registration of all Kenyans on the new HUDUMA NUMBER platform. For those of us in the Diaspora, we were not so lucky, it is still 45 days and we better register by the June 20 deadline, or else…. I am not quaking in my boots over the president’s directive or quivering over the arbitrarily deadlines imposed by the president or the haphazard manner in which the government rolled out its new fad, after all it is the Kenyan government and we are used to the dysfunction it is wildly notorious for. My take is that perhaps as Kenyans in the Diaspora, this is finally the opportunity we have been waiting for waiting for to advance our quest to vote, a right that has eluded us for a decade despite an existing constitutional mandate to do just that and multiple court orders to that effect that the government has adamantly refused to honor.

VOTER REGISTRATION IS A MANDATORY PREREQUISITE:

Voter registration of Kenyans in the Diaspora is a MUST before the Huduma Number can gain any traction. We now know that the government has been deliberately refusing to register us to vote because they have had the resources, equipment, time and wherewithal to perform the registration. The registration kits are provided by the same company that provides voter registration kits, IDEMIA Securities; the government has previously maintained that the registration is “gradual” and used this as an excuse to refuse to register us but here they are now with an urgent need to find new revenue sources, all of a sudden they impose a 45 day deadline for us to drop everything we are doing and troop to embassies around the globe and register for Huduma Number, or else… you see how that works? When it suits the government’s interests, particularly revenue collection, it is an emergency that we all must comply with but when it is your right such as voting and representation, it is a nuisance to them, you will wait for years, fight for it and still hurry up and wait. That’s how it works in Kenya folks. So for these reasons, I say to fellow Diasporians wherever you are: BOYCOT HUDUMA NUMBER, the government has boycotted you for so long as it is, let’s return the favor. This is our chance to get them on the table and to have a meaningful dialogue on the way forward – voter registration is the best place to start.

Fools rush in where angels fear to tread, and to Kenyans in the Diaspora I say, don’t be ensnared into the government’s chicanery, it is not acting in good faith or in your best interests. Tread carefully. Huduma Number is neither a necessity nor a priority because we DO NOT receiving ANY meaningful services from the Kenyan government other than the occasional mention. Of course they count passport and ID issuance as “services” but in reality these, whereas standard, are sporadic and too ineffective to count as services provided by the government. On the contrary, this government is insolvent and has a built-in incentive to register Kenyans to boost its revenue collections, it is just that they have disguised the Huduma Number as a great Service Delivery gateway. The Diaspora is the government’s cash cow, the golden goose that layeth the golden egg and get absolutely NOTHING in return; no allocation for healthcare, roads, hospitals, education, NOTHING, ZILCH (and we are not asking for it). We are an economic engine that pumps more than 200 Billion shillings in the economy of which at least 40 Billion shillings goes to the exchequer in taxes annually and has the potential to do even more, the government knows that and they are dangling the “services delivery” as BAIT so they can begin trailing us with the collection plate, folks I say, don’t take the bait. For the record, I am NOT opposed to paying taxes to support the country but Taxation without Representation is NOT the model we should support, especially in a corrupt government that uses tax money to enrich the few who run it, that MUST END. The way this would work in my humble opinion is that we should be registered to vote FIRST and ultimately vote so we are at the decision making table regarding governance otherwise NO DICE. Our priority is to have a say at the table in how we are governed and how our taxes are spent/allocated.

No Legal Basis For Huduma Number -– Truth be told, unlike Diaspora voting anchored in the constitution and back by multiple court orders, there is no legal basis or construct upon which this fad by the government is based. It is purely an administrative undertaking by unelected bureaucrats who believe they know what’s best for all of us, so much so that they did not even bother to get it anchored in law through parliament. Now you and I know that’s just simply how to do things, we have parliament for a reason, to make laws that affect all of us and yet here we are being commanded to submit to such a massive undertaking at the whims of a few individuals who don’t seem to care that the people have actually elected representatives to look after their interests, how does that happen? More importantly perhaps, why do we allow it to happen?

Corruptly Constructed – The government committed Billions of shillings for this exercise, the company awarded the contract, IDEMIA Securities, was single sourced but that’s not all. IDEMIA Securities has a checkered history in Kenya, it has gone through multiple name changes over the last five years in what is clearly a ploy to conceal its true identity and cover its tracks for the corrupt deals it has been accused of perpetrating on Kenyans in the past. IDEMIA Securities is also Safran Morpho that supplied the multi-billion Biometric Voter Registration (BVR) kits in 2013, in 2017 it morphed (pun intended) to OT-Morpho and supplied Kenya with Integrated Election Management System (KIEMS) which were at the center of election malpractice claims in the disputed polls. So controversial was IDEMIA Securities that Parliament wanted it outlawed but ICT CS Joe Mucheru defiantly allowed it to continue providing services, ICT’s CS Joe Mucheru: IDEMIA Securities to continue Despite MPs Reservations. Talk of impunity but more importantly, this exercise itself is a fruit of a poisonous tree and is therefore poisonous.

Data Security Concerns – For the Diaspora in the United States and elsewhere this is the equivalent of the Social Security Number issued by the US government that serves as a common identifier for practically anything and everything and so it is a must have. So we are used to it but the way it is being rolled out in Kenya leaves a lot to be desired. The government has not explained to the public how exactly the Huduma Number benefits the common mwanainchi except in platitudes, it has not explained how it plans to secure individual personal data so it is not hacked or used for nefarious reasons, it has not established any true purpose or limits for which use of Huduma Number use cannot exceed, set any laws establishing penalties for the misuse of the number, it is just an open ended government takeover of people’s lives.