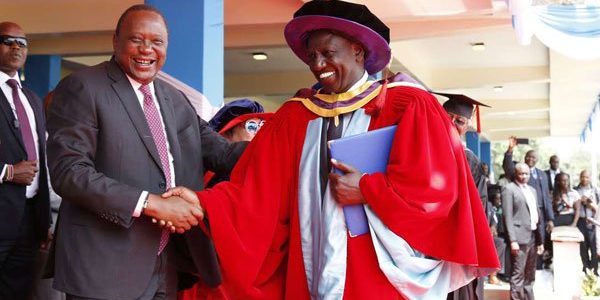 Kenya’s Deputy President William Ruto’s “graduation” with a PhD in Plant Ecology on Friday December 21, 2018 from the University of Nairobi, hitherto Kenya’s preeminent and citadel institution of Higher Education, has elicited sharply divided reactions from foes and friends alike. On one end of the spectrum are Mr. Ruto’s friends, particularly political allies who view Ruto’s graduation as yet another crowning moment that authenticates his prowess as an agile multitasker who accomplishes any goal he sets his eyes on and is therefore ahead of the pack in the succession battle for President in 2022. Indeed MPs from his political home-turf in Rift Valley have already proclaimed Ruto’s superiority to would be competitors in a crowded field for the presidency in 2022 on account of his new “PhD” alone.  On the other end are detractors, of which there are many, who see Ruto’s so-called graduation as nothing but yet another self-serving well-orchestrated stage managed publicity stunt by someone with a long standing history of staging elaborate fetes designed to advance his interests, a calculated marketing foolery to self-promote ahead of the 2022 presidential run and to them, his PhD is FAKE. The question in their minds how many Kenyans did Ruto fool by pulling this stunt?

A verse posted at the entrance of a South African University sums up my concerns about Ruto’s academic crowning perfectly, it reads,

“Destroying any nation does not require the use of atomic bombs or the use of long range missiles. It only requires lowering the quality of education and allowing cheating in the examinations by the students.”

Whatever your take is on this, truth is that Ruto’s PhD puts the validity and value of degrees awarded by the University of Nairobi and indeed Kenya’s entire university and college system into question because if Ruto can be awarded a terminal degree without as much of any discernible or meaningful effort to EARN it, then clearly the inference is that the rest of the degrees awarded to all who graduate from the University of Nairobi and other Universities and colleges in Kenya must, by default, just as easily obtainable and are therefore of very little value

In fact most people argue, credibly so, that Kenya universities/colleges graduates’ inability to obtain jobs and/or create jobs is a direct consequence of a) low academic standards due to an obsolete education curriculum that has lagged behind Kenya’s peers and the rest of the world for that matter that allows folks like Ruto to be awarded PhD’s effortlessly and  b) improperly obtained degrees through unorthodox means including subornment as in Ruto’s case and sex exploitation of students by instructors.

Let me qualify my consternation by stating that there is absolutely nothing wrong with one obtaining advanced academic credentials to advance his or her academic standing and advance their careers provided they invest the requisite OWN time, skills, ingenuity and effort to achieve their academic goals; it should be inspiring to all . The problem is when one leverages his/her position in society to cheat, when one uses chicanery to obtain that which must be earned as it appears to be the case in Ruto’s PhD. It defeats the purpose of education and devalues that which millions in society depend on to get ahead, it mocks the entire country and makes us a laughing stock and less competitive in an ever competitive world. Ruto’s PhD is yet another one of his long list of highly questionable acquisitions that severely impair fair play in our society, whether it is stolen public land, forcefully stealing land from a Post-Election Violence victim for which he was found guilty and fined KSh 5 Million, Billions worth of properties he cannot account for and anything in between, Ruto is a notorious hustler who has lived up his self-proclaimed title.

Ruto’s known activities do NOT merit a PhD award

Now I am sure some of you reading this are wondering why I am picking on Ruto on this and truth be told, there’s plenty of material on Ruto, this just happens to be one that I feel it’s validity needs some scrutiny as well. William Samoei Ruto’s activities over the last decade are well known and documented. Nothing in those activities would allow someone in his shoes, even granting that he’s a miracle worker with Supernatural Talent, to successfully pursue and complete the known workload and academic rigors necessary for attainment of a PhD. Ruto is said to have enrolled for his PhD in 2012, at the time he was battling indictment at the Hague for crimes against humanity for his role in the 2007/2008 PEV, he faced life in prison if convicted; this was itself a unique experience not just for the country but particularly for him considering the stress and effort of mounting a defense that required full time or quite a lot of time as it ran its course of four plus years – it was terminated without prejudice (meaning it can be revived again, actually it was a mistrial of sorts) in April, 2016. In March 2013, Ruto became Kenya’s Deputy President, yet another full time position and he immediately started campaigning for president in 2022. Ruto has himself taken a lot of credit for single handedly running the country as he accused President Kenyatta of being derelict and I just happen to believe that running the country also requires time; in the mix of that all these, he has amassed obscene amount of wealth – rumored to be in the Billions of shillings, indeed Ruto has been dishing Millions of shillings in fundraisers shoes sources are questionable and that far exceed his known pay or sources of income by multiples of 5 to 10 which means he’s running such an extremely profitable enterprise that his cup floweth over for him to be so charitable (boy I’d love to take a peek at his tax returns, maybe when the so-called Lifestyle audit finally hits but I digress); my point being that it requires time and effort to do all these things. Now, I may not be the sharpest knife in the drawer but someone needs to explain to me how a man in Ruto’s shoes with all these obligations and commitments can achieve such gigantic fetes and still study and pass the rigors of an academic PhD, what are we missing? Ruto’s work station is almost 200 miles from the swamp in Western Kenya which is the subject of his thesis, Who is fooling who? If Ruto is indeed a bona fide PhD, then I say 1 Million more Kenyans are equally deserving of PhDs and should be conferred their PhDs as well, fair is fair.

My point is that enough is enough, this trickery cannot be allowed to continue, the attendant rot permeates our society, it metastasizes and becomes the new normal, and hurts our standing as a people. We need to put an end to it, PERIOD.

BBI -YES OR NO? UNPACKING THE TRUTH ABOUT THE BBI REPORT (Part 1 of 4)
December 24, 2019
CONNECT WITH US
Recent Posts
Recent Comments
Meta
Go to Top