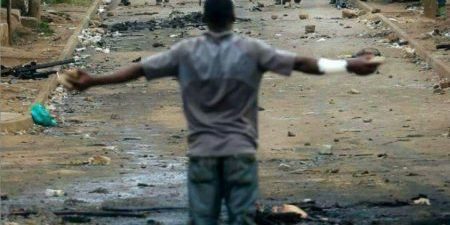 We all knew the August 8 election was so bad that the Supreme Court annulled it and we all thought IEBC learned its lesson, and that the do-over was a great opportunity for the Commission to admit to the error of their ways and fix them, boy were we wrong! The repeat “election” charade of October 26 turned out to be just that, a shameful charade. Even as it became eerily clear that the Jubilee Electoral & Boundaries Commission (JEBC) also known as IEBC was unprepared for a repeat election as illustrated by the resignation and revelations of Commissioner Roselyn Akombe and Chairman Wafula Chebukati himself, the commission under intense pressure from Jubilee’s Kenyatta and Ruto pressed ahead anyway, on all cylinders and created the shameful monstrosity that has needlessly further deepened the country’s crisis. Days before the election, a petition was filed before the Supreme Court to postpone the election, Chief Justice David Maraga certified it urgent. The Jubilee regime, paranoid and fearing that  the  Supreme Court  would in fact postpone the elections declared the 25 and 26 public holidays to obstruct and thwart the court from conducting the hearing! That’s a fact. And just to make sure the message got home, contemporaneous to the actions at the Judiciary, the Supreme Court’s Deputy President Justice Philomena Mwilu narrowly escaped an assassination attempt but her driver was shot, this was wasn’t just a coincidence no less than the murder of IEBC’s Chris Musando days to the August 8 election wasn’t a coincidence. On election eve, only Chief Justice Maraga and Justice Isaac Lenaola turned up in the Supreme Court for the hearing, Mwilu was scared stiff following the attempt on her life, the rest of the justices, no explanation was given as to what happened to them. Everyone was aghast at the brazen attempt to stifle the Judiciary via intimidation and subversion. The envoys expressed their dismay at this development and they deserve credit for that.  Of course the hearing flopped and Jubilee seemed to win the day, at least temporarily because that window allowed them to conduct the elections.

Truth is we only have two recourse avenues a) the Supreme court reasserts itself and right this fast sinking country or b) the people themselves take matters into their own hands of which the consequences there are no known recourse at this point. Whereas we can’t let the perfect be the enemy of the good, this pales in comparison to the August 8 election that the court found wanting, this charade was dreadful and embarrassing even to Jubilee. It backfired and proved to the world that the August 8 election was the biggest hoax perpetrated on Kenyans. To watch Deputy President William Ruto performance on CNN and Aljazeera as he struggles to explain the low voter turn-out and inflated votes on their column in front of world media after both he and president Kenyatta and spent Billions of taxpayer shillings buying influence and coopting election losers across the country was comical but for the fact that it is a sad chapter of Kenya’s dysfunction today. And when that failed they resorted to fudging numbers to show some semblance of legitimacy but even that failed because the dastardly Jubilee is too clumsy for their own good, in round 2 Kenyatta received 7.5 Million votes compared to 8.2 Million votes they claim they won in August 8, it’s a severe indictment of JUBILEE/JEBC that assigned Kenyatta more votes than actually voted and then resorted to retrofitting their “statistics” to fit submissions from polling stations, their own polling stations no less. But even with that Perhaps there’s some silver lining in this because even as this exercise was such an embarrassing flop it exposed the underbelly of the rot and maybe, just maybe, with the Supreme Court’s help, the country can fix it provided Kenyatta and Ruto are stripped of their abilities to interfere with the process.

REVERSE AND DECLARE THE PRESIDENCY VACANT

Left to their own devices Kenyatta and Ruto will burn the country, they have demonstrated as much so far and before, they couldn’t care less what damage they inflict on the country The Supreme Court has the original jurisdiction and final say in this matter and just like before, it is the only legal entity standing between an outright breakout of war and split of the country and a just & fair resolution.  I suspect the Justices are aware of the weight of this responsibility on their shoulders and will act accordingly. The Jubilee regime and the JEBC simply arrogated themselves as the LAW unto themselves and gave the Supreme Court, the Kenyan people and indeed the world community the middle finger – I think the Court will frown at that and won’t let it STAND. I don’t see a scenario where the court ignores the disdainful manner its ruling has been handled this second round and rubber stamps the “election anyway, after all the court had unequivocally stated the “PROCESS” as the key reason it overturned the August 8 election, the question it would have to answer itself is whether the second try complied with the ruling and the constitution or not – the answer is it DID NOT and therefore the same fate befalls the rerun.   I don’t think the Supreme Court has the appetite to put up with JUBILEE/JEBC shenanigans any longer, I believe  they are just as fatigued of this drama and  this time the Justices might send an even stronger signal to put an end to this shameful drama once and for all. The most effective way to put an end to this is to declare Kenyatta’s term as having expired on Nov 1, 2017 and effectively render the Presidency VACANT. This will strip Kenyatta and Ruto of their unfettered authority and access to resources to interfere with the electoral process once again and all attendant functions of government. The Court not only has the powers to do that but several valid reasons to as follows:

The Election was INCOMPLETE – On its own volition, IEBC suspended voting indefinitely in several Nyanza counties citing insecurity, whether real or imagined. Be that as it were, the bottom-line is more than a half of voters who voted on August 8 did NOT vote in the subsequent vote of October 26 through no fault of their own. In other words, they were disenfranchised and that CANNOT and must NOT stand, translated that’s “IMPOSSIBILITY OF PERFORMANCE” on IEBC’s part. The Kenyan constitution specifically and explicitly mandates that ALL constituencies MUST vote for an election to be considered valid. Article 138 (2) of the Constitution, on the procedure of presidential elections, in pertinent part states, “if two or more candidates are nominated, an election shall be held in EACH constituency.” In § 3(a) it also says, “all persons registered as voters for the purposes of Parliamentary elections are entitled to vote”. That did NOT happen here and therefore Kenyatta CANNOT be possibly be declared a validly elected President. It is IMPOSSIBLE! The constitution doesn’t provide for or carve out any exceptions or circumstances whence a candidate can be declared a winner if a constituency is locked out of the process let alone half the country.

IEBC FLOUTED THE LAW AND ITS OWN PROCESSES – When the Supreme Court deemed the August 8 process irregular and illegal it ordered IEBC start afresh, it required the commission to make substantive internal changes to fix the problems identified by the Court. Irregularities and illegalities DO NOT create themselves, somebody creates them, intentionally or inadvertently or both. In Kenya’s case, it was clear these illegalities and irregularities were presided by Ezra Chiloba, it is the only reasonable and logical inference that could be drawn. So the natural course of action would be to rid the commission of Chiloba, they didn’t. Now, even granting that Chiloba would hang around as he did – the commission should have made fundamental changes but instead they taunted and mocked the public with their “wembe ni ule ule” mantra and indeed nothing changed.

Bottom-line is Jubilee/IEBC shouldn’t be allowed to fool or outsmart the Supreme Court or the people, the presidency is supposed to be a unifier, instead it’s now the source of deep ethnic divisions and resentment, and no society can survive under such toxicity.