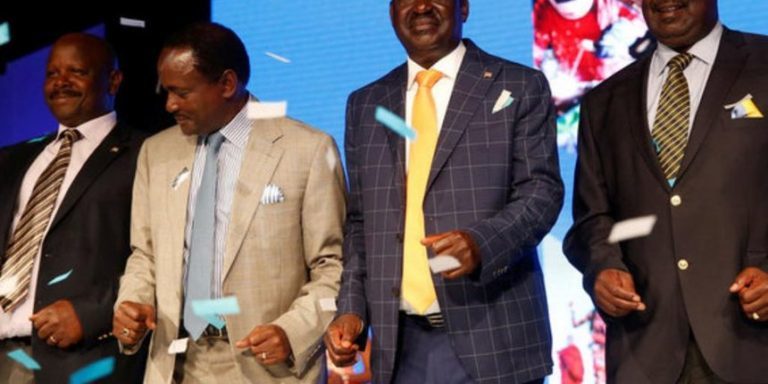 Caveat emptor is an old Latin phrase that simply means “buyer beware. It warns the buyer to perform due diligence on the product or service before buying because the buyer alone is responsible for checking the quality and suitability of goods before a purchase is made. In this installment the Kenyan voters are the buyers and Raila Odinga is the seller. Truth is things are looking up for “Baba”(or is it Joshua?) supporters / diehards, at this point, barely two weeks to the elections, majority of Kenyans are just aching for change even if it is just for change’s sake or  to kick the Jubilee government out of office, deservedly so I might add.

To Odinga’s supporters I say I hear you and know where you are coming from – I don’t mean to burst your bubble but please don’t get your hopes or expectations too high, Raila Odinga isn’t exactly what the Doctor prescribed for Kenya, oh no. If I had the power, I would elect one of the independent candidates but unfortunately most Kenyans are monolithic, independents are new in the scene. So if Raila wins, just be content that not much will change in government. A lot has been said and written about President Uhuru Kenyatta and his Jubilee government, of course majority of it has been negative insofar as his performance as president has been mediocre. But for a confluence of circumstances frankly of his own making, Uhuru Kenyatta would have had the easiest reelection ever but thanks to his affable nature, his lack of situational awareness, detachment from his own government and above all his conniving deputy William Ruto, Kenyatta created the perfect political environment for Raila Odinga to thrive. However, Raila is not the Joshua that will deliver Kenya to Canaan as he has branded himself. And here is why.

Whereas Mr. Odinga is going into this from a much stronger position than past contests thanks to Kenyatta’s own weakened position (Kenyatta is much weaker going into reelection than Kibaki was at this time in 2007), truth be told Odinga has a diminished capacity to lead. He has been unable to control his own ODM party which is steeped in controversy and violence, how can he run the country? Let’s not forget this is the party that birthed the 2007/2008 Post-Election Violence. They are just as violent today as back then. The Odinga of 2017 is not the Odinga of 2013 or 2007 much less years prior. That Odinga was a much more invigorated fighter, healthier and vibrant; the current Odinga is older and tired, has had head surgery and displays signs of forgetfulness. That’s fertile ground for opportunists to take over governance if Odinga wins and therefore we really won’t get what he has promised, he won’t be able to deliver.  What I fear is a scenario similar to Nigeria where they elected General Muhammadu Buhari whom for all practical purposes is incapacitated and moribund. Odinga is a populist who thrives on pandering and so once in office, which is really all he cares about, he just might lose site of his promises.

In recent months, Mr. Odinga came out once again advancing a constitutional amendment through a referendum to create new positions in his government to accommodate his coalition partners, “all” four of them. Yes, he’d rather spend tax money on this non-value adding stuff for his political buddies instead of repairing the deep fractures in the country for millions. Not surprising though, it is Odinga’s MO, this is the quintessential disjointed Odinga we have all come to know; just a few years ago, he picked up yet another poorly thought out initiative, “OKOA Kenya” (Save Kenya) he called it. It wasn’t to reign in corruption and waste of public funds, nooo! It was to increase funding to the extremely poorly run and corrupt cesspools called counties that he helped create. Folks, don’t forget, Raila gave us this constitution that has bankrupted the country, at the time of passage, Mr. Odinga didn’t want any changes or edits to improve the document, he was very adamant and animated about it, he said “don’t touch a comma or period” in the document when we wanted it improved first but he is now quick to change it for the flimsiest of reasons, so it is well beyond the realm of possibilities that Raila Odinga simply has misplaced priorities and wobbles on issues, he panders.

I will be as guileless as I can and call a spade a spade, truth is Raila Odinga incited the 2007/2008 Post Election Violence, whether his grievances were justified or not, fact remains his actions resulted in deaths and displacement of thousands of innocent Kenyans. We cannot discount that. He has tried to detach from this tag but it is the truth. I am not going to spend too much time on this but for those of you who care to find out the truth about this, I say read this book I authored at the time, “RUNAWAY REPUBLIC: TYRANY EXPOSED & CALL FOR TRUCE” https://www.amazon.com/Runaway-Republic-Tyranny-Exposed-Truce/dp/1618634607  the Let’s not get our hopes too high but if he wins, he should thank Uhuru Kenyatta and William Ruto.

Empty promises he can’t deliver even if he wanted to

Truth is the country is in a very poor state financially, Jubilee doesn’t want the public to know, at least not until after the elections but as I am sure most of you probably know, civil servants have not been paid this last month. No country or international lender wants to lend the Jubilee kleptomaniacs; the second mobile bond that Jubilee “launched” last month to raise 1 Billion shillings had only raised 128 Million, a far cry from its earlier success and a sign of eroding confidence in the government by Kenyans themselves, ( https://www.reuters.com/article/us-kenya-bonds-idUSKBN1A61WT). Jubilee not only emptied the coffers but put the country is a deeply precarious debt situation, the economy has shrunk in real terms, the government collects less than 50% of its budget, meaning it is operating on deep deficits but it gets worse, interest and debt payments are eating up almost 50% of its collections, you do the math. My point is that Raila cannot deliver the Canaan he is promising Kenyans even if he wanted to, the country is insolvent guys. The 100 days changes he promises are wishful thinking, only rhetorical.

Odinga is NOT the democrat he portrays himself to be

The irony of it all befuddles me a lot, I mean you don’t have to look too far, most of those in elective office from Luo Nyanza or areas around the country that Odinga has considerable influence are handpicked by Odinga himself, including family and friends. His party ODM has been accused of selling election tickets to the highest bidders and in the process subverts democracy; there are multiple instances to prove this. He has masqueraded as the champion of democracy, indeed more than half the country refers to him as the “father of democracy” and credit him, almost solely, for the democratic advances Kenya has made over the years but let’s just be honest, Raila Odinga is the antithesis of democracy. He holds Luo Nyanza in a very tight grip, the entire tribe only knows one political party, ODM. Any opposition to Odinga in Luo Nyanza is not only frowned on but crashed mercilessly; the community is under Mr. Odinga’s Yoke. So while he sanctimoniously pontificates about democracy to the rest of the nation and basks in the attendant accolades for expanding democratic space in the country, his own people are hopelessly his political captives. How does that work? Someone please reconcile that for me. Truth is Kenya has hundreds of heroes who have made selfless  sacrifices to advance the country’s democratic space including the likes of Jaramogi Oginga, Kenneth Matiba, Prof. Wangari Maathai, George Anyona, the Late Masinde Murilo, Rev. Timothy Njoya, Bishop Alexander Kipsang Muge, Raila Amollo Odinga and many others. My point is not to minimize Odinga’s contributions but to say there’s plenty of credit to go around. If anything, Odinga’s rise to prominence is tied to his father and his role in the 1982 coup attempt.

He benefited immensely from his father’s coattails, Raila’s time in detention wasn’t for advancing democracy but for attempting to overthrow a legitimate government in the 1982 coup, simple as that. In fact I would say that Raila Odinga’s actions in the coup worsened the human rights record of the Moi government because Moi wasn’t the dictatorial monster he turned out to be after the coup attempt, no! Moi became paranoid after the coup attempt and tightened his grip on power along with it the accompanying human rights abuses. History cannot be recreated, so Odinga shouldn’t be allowed to take credit retroactively for helping solve a problem he himself created in the first place, come on now.

Odinga is nepotistic and a crony capitalist

Kenyans have always complained against ethnic dominance and chauvinism. The Jubilee government perfected this vice over the last four plus years; Kikuyus and Kalenjins had a disproportionately favorable access to government jobs and benefits than all others. Kibaki and Moi were no different. And if you think Raila will be any different, think again. Odinga, as Prime Minister in the coalition government appointed his family and friends first and everyone else after if they were lucky. His stint in government was riddled with nepotism, everyone else got  sloppy seconds and was left to scrape from the bottom of the barrel. My point is if you are used to sloppy seconds under Jubilee, don’t expect any major changes under a Raila presidency.

Odinga is not loyal and burns bridges- Don Bosco Gichana

Most of you remember the Hammer that Odinga rode in for a while, it was gifted to him by Don Bosco Gichana, a former Diaspora and best friends with Odinga’s late son, Fidel. Don Bosco Gichana treated Raila Odinga like his father, more than a father. Don was ensnared and kidnapped by Tanzanian authorities on the Kenyan side of the border and illegally extradited to Tanzania in what we are told was a money laundering fraud sting supposedly involving Billions of shillings in Tanzania. This was several years ago. We were told that the Tanzanian government had an iron-clad case against Don Bosco, we were even told that the United States government wanted him extradited to face more serious charges in the United States which was FALSE. I am NOT defending Don or speaking of his guilt or innocence but Don deserves and is entitled to due process under the law. Don’s incarceration in Tanzania, supposedly a friendly country, for years now and without any charges or trial and with no end in sight clearly is a sad tale of miscarriage of justice. Don has lost several years of his productive life languishing in jail for unproven accusations, he mother died while he was in jail. Raila Odinga a,k,a.  “Baba” has never lifted a finger despite his close friendship to Tanzanian President John Pombe Maghufuli who, as the president in charge of the executive, is responsible for prosecutions. President Uhuru Kenyatta and his Deputy William Ruto were accused of some of the worst crimes known to humanity including murder and the government expended Billions of shillings and effort to exonerate the president and his deputy. My point is Raila Odinga could have done way more for Don but he chose not to, Don is not Odinga’s flesh and blood otherwise he would be free today, so don’t expect any loyalty from Raila Odinga and there are many other stories including Miguna Miguna’s, William Ruto, Carolli Omondi and so on and so forth, too many to count.