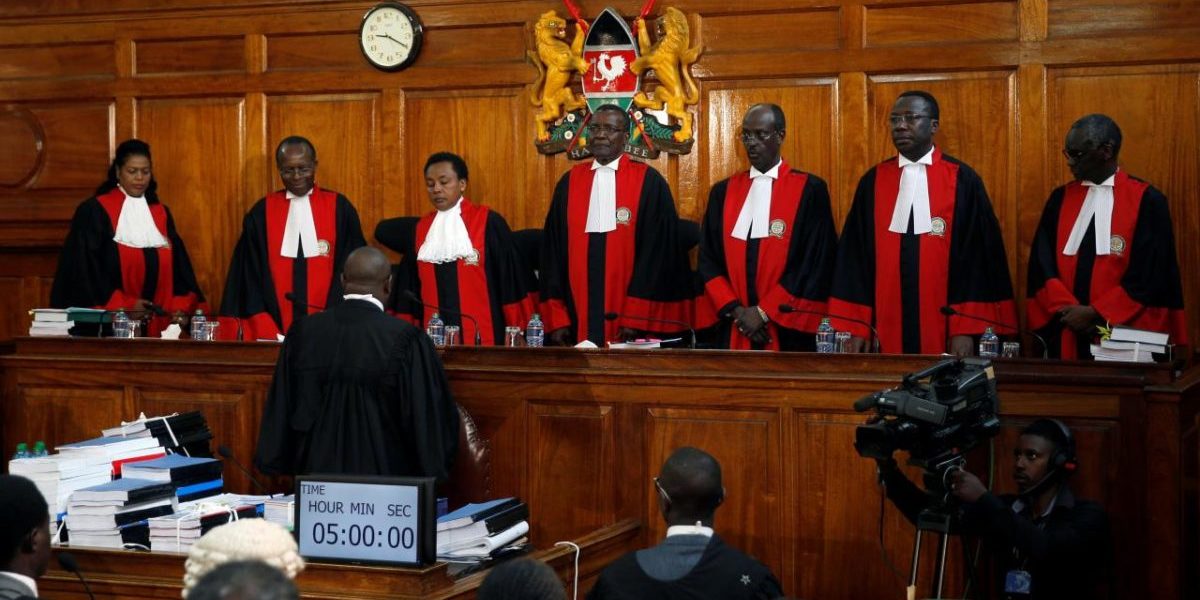 As the Supreme Court grapples with the second petition challenging Uhuru Kenyatta’s “victory” there is clear evidence that this was completely avoidable and the electoral commission failed to mitigate blunders it knew of and acknowledged or should have known of. Commissioner Roselyn Akombe’s resignation and Chairman Wafula Chebukati’s own confession castigating the commission for its inability to conduct credible elections pretty much summed it all and perhaps makes it for the Court to render a decision. I also believe that the Supreme Court should have ordered a SUPERVISED election and appoint a “special master” to oversee the exercise to ensure its orders are followed. There is no question that something, actually a lot of things, are wrong in Kenya’s electoral process. We hoped that the August 8 elections and subsequent nullification of President Uhuru Kenyatta “victory” that exposed the soft underbelly and rot of the electoral system would result in modest enough changes in the follow-up election on October, 26 to restore confidence in the process. But no, that was not to be, not even the jolts from the Supreme Court’s ruling was enough to make any difference, instead the Jubilee regime and the Independent (Jubilee) Electoral & Boundaries Commission (JEBC), colluded and doubled down of their previous chicanery, intimidation and fraud to frustrate the constitution and the Supreme Court to produce in yet another flawed election. In short, Jubilee and JEBC gave the Supreme Court, Kenyans and indeed the international community a BIG middle finger on October, 26 and the court will see through all that. The so called election was a charade – an absurdity so badly bungled with glaring anomalies than the August 8 election that the outcome of the ongoing petition before the Supreme Court is almost a certainty. I don’t see a scenario where the Supreme Court upholds this travesty that mocks the court itself. The Court’s credibility and indeed that of the Justices themselves is on the line. It would not only be inconsistence to the earlier nullification but also render the Court’s earlier ruling meaningless while setting a dangerous precedent for the country. It will simply broadcast to the world that Supreme Court rulings or any court’s rulings for that matter in Kenya mean nothing because you can always work around them if you really want to especially if you are in power and in control. At this juncture in Kenya’s history only a handful of people hold the country’s future in their hands, on the one hand those who hold her at ransom led by Uhuru Kenyatta and William Ruto and on the other hand seven justices, four to be precise, stand in the way of the country’s disintegration. I have confidence that the Justices are wise and have fidelity to the country and her laws and will do what’s right, they have to live in Kenya and with their conscience.

THE SUPREME COURT CAN’T BE FATIGUED TO SUBMISSION
After the ruling that nullified Kenyatta’s August 8 “victory”, Chief Justice Maraga was quoted as reiterating that he and the Court presides over will not hesitate to overturn the election again if the Constitution and the Laws are not followed irrespective of who the contestants are, “For as long as the Constitution has the provisions granting this court the mandate to overturn a presidential election in appropriate circumstances, it will do so because the people of Kenya in the preamble to the Constitution adopted, enacted and gave unto themselves the Constitution for themselves and future generations,” he said. JUBILEE/JEBC are counting on the Supreme Court being too fatigued and too intimidated to overturn the October, 26 charade. Even as you read this there are reports of a lot of behind the scenes activities aimed at the Supreme Court Justices specifically, to obstruct them, thwart and frustrate their work and as before, it’s speculated that William Ruto is leading the charge. There is no question in my mind that Justice Maraga and his fellow justices who annulled the August 8 election have their hearts in the right place and will not allow this nightmare endure too much longer.

WAS THE OCTOBER 26 ELECTION BETTER CONDUCTED THAN THE AUGUST 8?
Of course NOT! By any objective measure it is a big NO. The Jubilee regime bulldozed its way through coercion, intimidation and force and murder to work around the law and the courts to conduct a fake “election” which really ended up proving NASA’s Raila Odinga’s assertion that Kenya’s electoral malpractices, past and present to be TRUE. 28% of registered or 5.5 Million people shouldn’t determine the fate 40 Million, 10 Million voters were intentionally disenfranchised by Jubilee/IEBC, that cannot stand, partial votes

BAD LAWS INCONSEQUENTIAL
Jubilee’s rush to pass to pass laws in Parliament to inoculate themselves and the President from the Court’s jurisdiction was misplaced. Contrary to their self-serving provisions to by-pass the constitution and the Court’s ruling, it is imperative that we remember that the court never found the law at fault in the first place when rendering its ruling but rather JEBC’s failure to follow the law. So Jubilee is sorely mistaken insofar as the new laws it passed are concerned, in fact they are not only fatally flawed, irrelevant and unconstitutional but also so impractical that even Kenyatta himself did NOT sign them. They are comical and no court of competent jurisdiction, let alone the Supreme Court, would consider them in adjudication election disputes, just that simple. These are some of its provisions, “ A form prescribed by this Act or the regulations made thereunder shall not be void by reason of deviation from the requirements of that form, as long as the deviation is not calculated to mislead”, can you believe that? In other words, you can enter forgeries on the forms and Jubilee says that’s permissible!, Gets better, “a court shall not declare an election void for non-compliance with any written law relating to that election if it appears that (a) the election was conducted in accordance with the principles laid down in the constitution and in that written law; and (b) the non-compliance did not substantially affect the result of the election.” I mean it’s really hard to make this stuff up, Jubilee’s cockamamie attempt to legalize electoral fraud surpasses any arrogance I have seen in a long time.

BALLOT STUFFING IN REPEAT POLL A BIG FLOP
It is inexplicable to me what JEBC was trying to achieve by embellishing voter turnout, it backfired so badly and ended up proving Odinga’s assertions of electoral malpractice, past and present including on August 8. We all know that on August 8, JEBC announced Kenyatta’s win at 8.2 Million votes against Raila Odinga’s 6.8 Million i.e. 54% and 44% respectively. Upon nullification, Jubilee taunted the public and bought many “prominent” opposition figures who had lost on August 8; “wembe ni ule ule” they said, they promised 70%+1 or about 10.5 Million votes for Kenyatta and Ruto in the repeat election but what happened in reality? Ready for this? Even with Raila Odinga withdrawing from the race, JEBC not only struggled to reach its goal of 10.5 Million votes but also couldn’t even produce Kenyatta’s original count. Instead, JEBC official vote count for Kenyatta was 7.4 Million votes for Kenyatta, 800,000.00 votes short of what he supposedly received in the original poll! UH! But that’s not enough, evidence widely available in the public domain shows that JEBC can only account for 5.5 Million voters turned out based on Biometric identification on the voter register. Pressed to account for the difference, i.e. 2.1 Million additional voters it claims voted, JEBC became very creative, they said that of the additional 1,622,276 voters were based “alpha-numeric search” and the other 428,043 were identified using “documents search in the register”, are you guys with me? You got that malarkey? What court of competent jurisdiction would put up with this nonsense? Truth be told and the nation knows this now, JEBC stuffed ballots for Kenyatta, by 2,050,319 to be exact, that’s according to JEBC’s own data. It is electoral fraud of epic proportions and must not be allowed to stand, not at all.

In the proceedings before the SC on Nov 14, Jubilee/JEBC lawyers were tongue tied and talking gibberish as they struggled to spin the 1.6 Million new “Alpha-numeric search” voters that couldn’t be identified biometrically, Jubilee’s lawyer somersaulted before the Supremos trying to explain its “complementary mechanism” of verifying voters but I believe they saw through the chicanery, I don’t think they were convinced because the NASA lawyers eloquently shred Jubilee’s contention to pieces. NASA contradicted JEBC’s own rules as evidenced by the memo signed by Ezra Chiloba. https://www.youtube.com/watch?v=2jgH5M7n94I The Perhaps the biggest exposure to Jubilee/JEBC in this saga is that on August 8, there were no cases of “Alpha-Numeric” or “other documents search” voters in the August vote but all of a sudden there are more than 2 Million non-biometric voters in October from the same voter register? Really? Who’s fooling who? How is that even possible? What happened between the August and September voter registers? JEBC claims that its results transmission provider OT-Mopho proves were an accurate representation of identified voters but that’s not necessarily true, OT- Morpho only transmits what its told just like it did on August 8, it is Garbage In Garbage Out

IEBC VOLUNTARY OPENING OF SERVERS A BIG DEAD GIVEAWAY
Yet another bizarre act, clearly an attempt to cover its tracks, JEBC, without any court order or prompting from anyone, invited contestants to scrutinize its server. We all remember that JEBC adamantly refused to open its servers for the August election even when ordered by the Supreme Court to do so. JEBC tried to preempt the fate that befell it after its refusal but I think it did them more harm than good because it confirmed to the world that once again Raila Odinga was right and Jubilee/JEBC was hiding something in August. Of course we know of the thousands of logins by both Chairman Chebukati and Jubilee’s Chief agent Chirchir to IEBC that changed results submissions thousands of times, it’s just that IEBC refused to allow examination of the changes that were made. To this day nobody has been allowed to examine the servers with respect to that election. So it isn’t just curiosity or irony that IEBC now voluntarily opens its servers when there’s no interest much less any competition, it is confirmation of the electoral fraud that they perpetrated in August.
Bottom line – the country is at the crossroads and the Supreme Court is the last hope of preserving the republic. The October 26 “election” compounded the problems of August 8 and the country’s as well. It is the public interest and indeed best public policy that the October 26 exercise be set aside yet again and the country get a fair and just outcome from the election. START over – AFRESH!