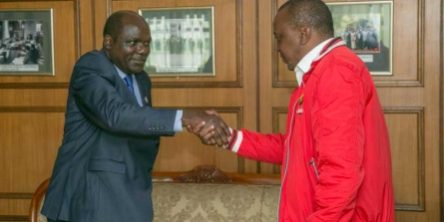 It is no secret that Kenya is in a particularly precarious position going into the second presidential “election” following the overturning of the August 8 elections by the Supreme Court. The Court determined that the process was so flawed and wrought with “illegalities” and “irregularities” that it had no choice but to nullify the election. The best way to sum its judgment is the principle applied by the Court, i.e. principle of “finis coronat upus” – which simply means that the product is as good as the process that produced it. The simplest analogy is this, suppose your wedding day baker decides to use rotten eggs for your wedding, it will be a bad cake and he would have ruined that special day; suppose you also find out that the baker actually knew he was using rotten eggs and purposely used them anyway? What would you do? You will not be happy. It is no different here. The Independent Electoral & Boundaries Commission (IEBC), now pejoratively referred to as The Jubilee Electoral & Boundaries Commission (JEBC), was severely indicted and convicted of electoral malpractices by the Supreme Court, it was given an opportunity to redeem itself and follow the law. At the time of the Supreme Court ruling, the JEBC put a unified defense albeit weak. Of course they lost. Now, rather than correct its own mistakes and conduct a fair and free elections, it has doubled down on its original sins, it is blatantly playing Russian roulette with Kenyan lives instead. JEBC poses an existential threat to the Republic as we know it and time to act is now before it is too late.

CHEBUKATI SHOULD REVERSE HIMSELF & RESCHEDULE THE ELECTIONS

Fool me once shame on you, fool me twice shame on me. Chairman Wafula Chebukati has an obligation and responsibility to Kenyans to turn JEBC back into IEBC. His fidelity is to Kenyans and not IEBC. He has the authority and discretion to hold off on the Thursday election, a simple declaration by Chebukati to the effect of “impossibility of performance” will suffice; it will go a long way in rescuing not only the IEBC but the country as a whole, it will be brave of Chebukati and substantive. He can even resign if he so choses and put the nation ahead of his own interests, it would be more honorable than conducting a sham election. His fellow commissioner in charge of field operations Dr. Roselyn Akombe ran away last week and resigned. She spilled the beans on how compromised the commission is by JUBILEE and how hopelessly dysfunctional and corrupt the JEBC is. Chairman Chebukati followed up with his own express confession that even he cannot guarantee a free and fair election on October, 26. This is a 180 departure from the commission that defended itself at the Supreme Court just weeks ago, it is DISINTEGRATED, discombobulated, disjointed and simply unable to properly perform its functions. So what’s the point in proceeding to an election you yourself have no faith in? In it a non-sequitur. You are admittedly worse off now and unprepared than you were in the last election, why waste Billions of shillings that we don’t have on the flawed election? What’s the point in that? Don’t mock Kenyans,

To Chairman Wabukati, you are damned if you do it, damned if you don’t. Truth is chairman, you will be blamed EITHER way; on the one hand If you stop the elections, lives will be saved, Billions will be saved, and the country stays intact. On the other hand If you ignore the warnings and your own counsel and carry out a sham election, it’s most likely to be annulled by the Supreme Court again, lives lost and the country would most likely break up, the choice are VERY clear.so what’s more important? It’s common sense you would think, right? I say assert your independence and save the republic, doing the right thing and conducting credible elections supersedes any deadlines, the sixty day clock from the Supreme Court is not edged in stone, it is superficial. You need to be responsive to the calls of the people, don’t be tone deaf, government should be for, of and by the people not of, by, and for Kenyatta and Ruto. So do the right thing Chairman, Kenya is counting on you.