“Adopt A Polling Station”: Voter Access Rights On Election Day Must Not Be Abridged – Matiang’i Must Be Reigned In 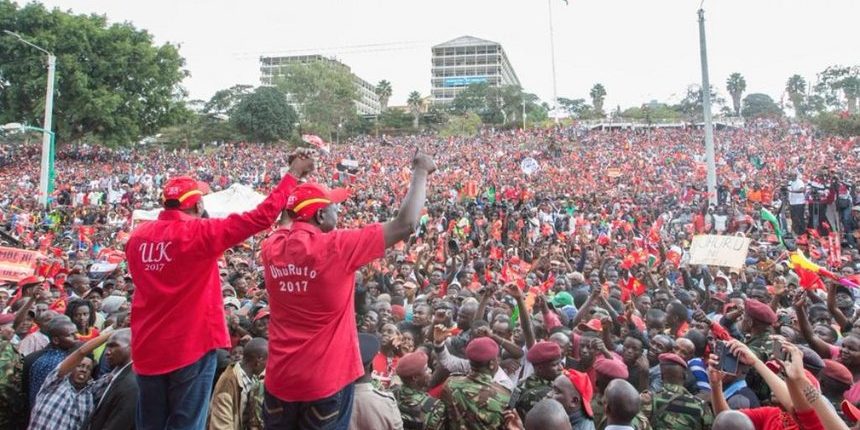 First let me start with condolences to the family of IEBC’s Director of ICT Chris Msando who was brutally tortured and killed days to the elections. Msando was a critical talent that would have ensured that elections are free, fair and transparent but his life was cut short by what appears to be an attempt to influence the elections. May he rest in peace and if only for his honor, let’s keep the fight to ensure the elections are truly free, fair and transparent. And that leads me to my topic. Perhaps I should start with my pieces of advice first:

These are tense moments in the country as everybody already knows, don’t compound the problem with the ASININE edicts you issued. In NO UNCERTAIN TERMS should you impose the primitive and archaic 400 Meter buffer rule, DO NOT DO it! It is unlawful and impermissible. The following is what I expect going forward:

De-Escalate the Tensions – Don’t drive a wedge between the government and the people needlessly. Tone it down Matiang’i, in Kisii we say “chiera okobee”( walk on your left) and I am sure you know exactly what means. Reverse your declarations.

Provide Security, not fear – This is neither the first nor the last election in Kenya, voters are generally peaceful. On Election Day, provide security let people vote and if they choose to linger around as they “adopt” a polling center, so be it – it is their right. If you insist on infringing these rights and your actions result in confrontation/violence, you will be personally responsible for the consequences.

Crowd Control – Any security measures you put in place must be seen as being in good faith and for the overall benefit of the nation and its people as opposed to protecting the interests of any one candidate. To that end, start with designating areas for the “adopt a polling station” guardians or anyone else for that matter to hang out. The object is to allow as full access to the process in an open and transparent manner to all stakeholders without impeding the election process itself. You will gain more support and friends from Kenyans in general than blocking access and trying to gag voters as you have currently announced.

Reverse The Curfew – The curfew serves absolutely no purpose and to the extent its targeting opposition strongholds, clearly it suppresses voter participation and-turnout, it is a form of oppression by the government, SCRAP it – pronto.

About a year and half ago, Dr. Fred Matiang’i was appointed to replace Dr. Jacob Kaimenyi as Cabinet Secretary for Education. The Ministry was in shambles at the time. Matiang’i immediately issued a raft of edicts to streamline the education system, as well intentioned as he might have been, came in with a preconceived notion of what was wrong with the system and that he alone, unilaterally, without any consultation or backing of statutes, would fix it. Result – he turned the country’s education on its head. Matiang’i’s edicts were intended to stop cheating on national exams but what followed was a complete meltdown across the country; teachers and students revolted, tens of schools were torched and burned to the ground, lives lost and Billions worth of property destroyed. All avoidable. Matiang’i adamantly refused to listen to public uproar and doubled down on his warped narrow path of “straightening” the sector, he changed the exams that students had prepped for as prescribed in the KNEC curriculum and instead tested them on completely new material. Needless to candidates failed in troves not because they were stupid but because of Matiang’i’s impulsive and erratic uninformed decisions. Mantiang’i ruined thousands if not hundreds of thousands of Students’ lives, some of whom would successfully applied and admitted to universities outside the country but for Matiang’i’s decisions. All the billions of shillings in tuition and fees that parents spent on their children practically went down the drain, thanks to Matiang’i.

Fast forward to a month ago when Matiang’i was appointed as Acting Internal Security Cabinet Secretary following the passing of General Joseph Nkaisery and clearly he’s at it is at it again. Even before President Kenyatta’s appointment signature ink had dried, Matiang’i immediately issued yet another raft of edicts that are a recipe for disaster as we saw in the Ministry of education just months ago including creating 90 day curfews in mainly opposition strongholds that he said will secure the country but perhaps the most egregious is his recent declaration barring Kenyans from guarding their vote on Election Day; do you follow me so far guys? See the pattern here? Matiang’i is acting as an inexperienced “shoot now ask questions later pyromaniac who, left to his own devices, will burn the country down. He has proved to be too impulsive and too erratic to be entrusted with such a sensitive docket of securing the country. Securing the country requires a steady hand, Change MUST always be orderly and yes gradual. The alarming and outlandish proclamations that Matiang’i has made not only scare the public and suppress voter turnout but also incite the public to violence. His actions are counterproductive because they undermine the constitution and the rule of law, as the nation’s purveyor of law and order; he is in fact setting the stage for confrontation as opposed to law & order and has needlessly created public anxiety in the pretext of security.

This is what Article 37 of the constitution says – “Every person has the right, peaceably and unarmed, to assemble, to demonstrate, to picket, and to present petitions to public authorities.”

Immediately upon his appointment, Matiang’i issued an edict that placed a draconian and frankly UNLAWFUL 90 day curfew on mainly opposition stronghold counties that the government considers “security risks/hotspots’ that proclaimed as follows – “Every person who resides within this Sub-Counties shall except under and in accordance with the terms and conditions of a written permit granted by the respective Deputy County Commissioner of the affected areas, remain indoors in the premises at which they reside or at such premises as may be authorized,” reads the Kenya Gazette Notice no. 107.

Matiang’i is arrogant but that is not an excuse or substitute for the law itself. Kenyans have an UNCONDITIONAL constitutionally protected right of peaceful assembly at any time, it is not predicated on any one person’s interests or Matiang’is whim, no.  Fred Matiang’i, just like he did at the Ministry of education, is acting way outside the bounds of law, he’s acting as he is the law unto himself. Call it inexperience or incompetence or both but Matiang’i’s crusade on behalf of Jubilee cannot stand, PERIOD! Matiang’i, in direct contradiction to the supreme law of the land is trying to single-handedly override the Kenyan constitution to suit his interests and preserve his own interests and those of Kenyatta as opposed to those of Kenyans. He arrogantly referred to Raila Odinga’s supporters as “HOODLUMS” those are fighting words, incendiary and confrontational to say the least. To me, the real HOODLUM beating war drums is MATIANG’I himself.

There is deep distrust of the electoral process in Kenya that runs decades; Fred Matiang’i serves at the pleasure of President Uhuru Kenyatta who is fighting an uphill reelectionbattle, Matiang’i is beholden to Kenyatta and has a vested interest in the outcome of the elections because his very job and future directly depends on Kenyatta’s reelection. In this case Matiang’i has only amplified that fact by way of  the edicts he issued, again, Matiang’i is serving President Kenyatta’s interests and not the interests of Kenyans. Matiang’i is the proverbial “FOX GUARDING THE HEN HOUSE” in this election and that’s a problem by any objective measure. This MUST STOP!